Anti-regime groups have made gains in a joint offensive on a bastion of Syria's government. As the country's civil war continues, the UN-appointed mediator is hoping to restart peace talks. 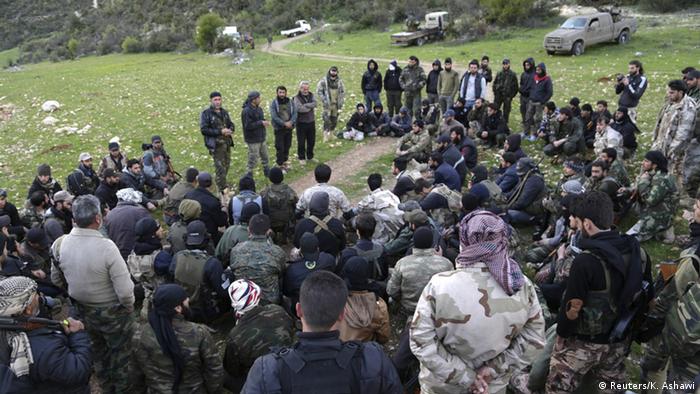 The al Qaeda-affiliated Nusra Front and other groups have seized four checkpoints around Jisr al-Shughour, in Idlib province, since Thursday, the Syrian Observatory for Human Rights reported. Observatory head Rami Abdel Rahman told the news agency Agence France-Presse on Friday that the Nusra Front had conducted a series of suicide attacks on the city's outskirts and had sent 15 fighters with bomb belts into the city itself.

"There are very fierce clashes ongoing since the early morning, and intense aerial bombing," he said.

The coalition seized two checkpoints Friday and has battled for three others around the city, Abdel Rahman said, adding that the clashes had left 13 rebels and 10 soldiers of the regime dead so far.

The Nusra Front and the rival "Islamic State" terrorist militia recently fought against Syrian President Bashar al-Assad's regime in a bloodbath at the Yarmouk camp for Palestinian refugees in Syria's capital, Damascus. Two weeks ago, Nusra is believed to have taken hundreds of Syrian Kurds hostage before ultimately releasing them.

On Friday, UN spokesman Ahmad Fawzi told reporters that preliminary consultations between the new Syria mediator and select parties to the conflict, set to begin May 4, could last several weeks. Staffan de Mistura, the incoming mediator, would keep the UN Security Council informed about the progress of these talks, he added.

De Mistura, an Italian-Swedish diplomat, succeeded Lakhdar Brahimi as UN special envoy for Syria in July, after the Algerian statesman's attempts at launching a lasting peace process had failed. In January, talks in Moscow between opposition groups and representatives of Assad's government ended with little progress.

The United Nations estimates that more than 220,000 people have died in Syria's conflict, which started with peaceful anti-government protests in March 2011 before a deadly crackdown by the Assad regime led to a full-blown multifront civil war that has also drawn in thousands of foreign nationals, including Germans, who often transit through Turkey to fight alongside various factions.

According to the United Nations, about 440,000 people remain in besieged areas: Around 167,500 are trapped by government forces, 228,000 by the Islamic State, and the rest by other armed groups. Nearly 4 million Syrians have fled to neighboring countries.

At the UN headquarters in New York on Friday, the American actress Angelina Jolie pleaded with world powers to help the millions of people who have fled Syria. Jolie briefed the Security Council in her capacity as special UN envoy on refugee issues.

"We cannot look at Syria and the evil that has arisen from the ashes of indecision and think this is not the lowest point in the world's inability to protect and defend the innocent," Jolie told the Security Council, which has repeatedly been deadlocked on ways to end the displacement and suffering.