"Undressed", "Unseen" and "Pool Party" are the names of three separate exhibitions that fill a whole floor of the Helmut Newton Foundation in Berlin. Dedicated to the works of Mario Testino, Helmut Newton and Jean Piggozi respectively, they are a testament to the beauty of the human body in its many shapes and sizes.

While Newton's shots present the perfectly sculpted bodies of models and celebrities bounded by the dimensions of vintage prints, Testino's images are enlarged to mythical proportions in the rooms dedicated to his site-specific installation, and in which his objects look down upon visitors like demigods. Piggozi's paparazzi-esque style, with which he captures his famous pool parties, shows mere mortals - thin or fat, hairy or balding - having very earthly fun.

Matthias Harder, the curator of the exhibitions, talked to DW about the project.

DW: Here we are surrounded by more than 150 photos of naked or semi-naked bodies. What do you think about the contemporary trend of censoring the artistic depiction of the human body on social media - or elsewhere?

Matthias Harder: I find it quite ridiculous. I am excited to have done these three exhibitions because photographers like Newton and Testino are responsible for the modern acceptance of nudity, for the whole sociocultural shift that happened in the last fifty years.

Newton started smuggling nudity into his images in the early 1970s. He created work that was provocative and edgy yet subtle, conscious and intelligent. He made photos for "Vogue" magazine where the same models are seen both dressed and naked in the same poses side-by-side. He also played a lot with genders: We have here on display a photo of a naked woman standing next to another woman who is wearing a tuxedo from Yves Saint Laurent. That was a revolution! He played those games, and he played them perfectly. His work still pushes buttons and makes us interpret what we see. Mario Testino is quite similar - his pictures are full of delicate obsessions and lustful sensitivity. 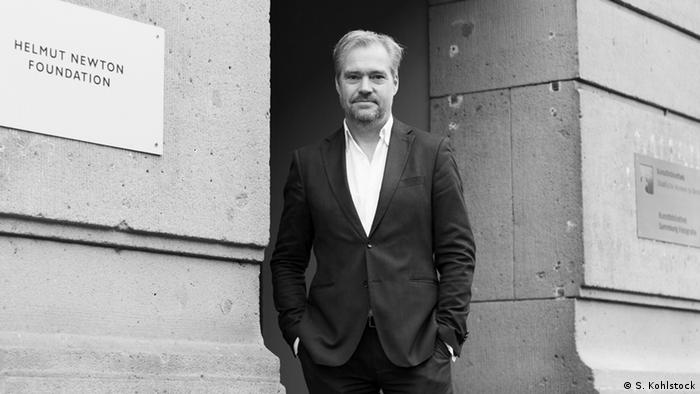 The chronology of the exhibitions stretch across several decades. How did the perception of nudity change over that time?

Looking back at Ancient Greece, for example, nudity was fully accepted. The gymnasts, preparing for the Olympic games, trained naked, and it was seen as something normal. Nudity became a taboo in Europe thanks to Christianity. But it had its place in art even in the times of the harshest repressions - you can see many Eves, Lucretias, and even breastfeeding Marias in galleries all over the world. Nudity plays a pivotal role in art.

In the 20th century, the change happened in the 1960s with the "flower power" generation and the feminist revolution that freed women's bodies. In Saint-Tropez, sunbathing half-naked was the only possible attitude. Helmut Newton documented all that while twisting what he saw. Photography at that time was closer to realism than art, but he somehow connected the two worlds. He was using the zeitgeist but also creating his own enactments and mise-en-scènes.

He wasn't the only one, of course, but his work was favored by fashion magazines - and what goes into fashion, goes into society.

I think male nudity is the last taboo; it is not yet completely accepted. That said, Newton, Testino and Piggozi treat women and men equally. Their photography maintains the same attitude towards women and men, which is apparent in the way they use the same techniques and styles to render them.

Pigozzi's work includes some candid, amateur-like photos, which is a very contemporary approach to photography. When did snapshots become worthy of exhibiting? 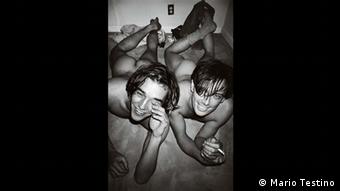 Nowadays, there's a camera in every smartphone, and millions of images are taken and shared every hour. It's an entirely different distribution of photography. The [Helmut Newton] foundation, however, represents the classic way. Pigozzi's pool party snapshots are amateur photos, but the atmosphere, the lifestyle, and the people are no different to those in the images of Newton or Testino.

As you mentioned, we live in an age dense with images where people even communicate via GIFs and emojis. Aren't photography exhibitions obsolete and redundant?

On the one hand, I appreciate that people are crazy about pictures. On the other, it seems a bit too fast and superficial to me. Images on Instagram or Snapchat last only a few moments, and they are even meant to disappear. But people who come here are not interested in pics of someone's dinner; they come to enjoy masterpieces and want to observe them for several minutes in detail.

The aim of all photography curators and institutions should be to make sure classic photography remains relevant and popular, to press people to start thinking about the medium of photography ... and to eventually look differently at the world.

The German-born photographer died in a car accident in Los Angeles Friday. The self-proclaimed "King of Kink," who rose to fame with controversial images of women and fashion, will be honored with a new museum in Berlin. (25.01.2004)

Photographer Helmut Newton will be buried in his home town of Berlin on Wednesday, not far from the grave of Marlene Dietrich. Two days later, more than 1,000 of his photographs are going on display in the capital. (02.06.2004)