Nuclear waste completes its journey to German storage facility | Germany| News and in-depth reporting from Berlin and beyond | DW | 29.11.2011

A convoy of nuclear waste containers has completed its grueling journey to Germany for storage after the most time-consuming operation of its kind due to violent clashes between police and activists. 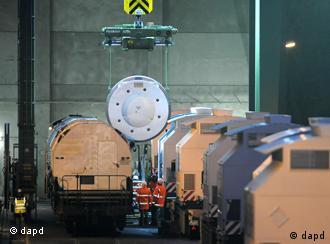 Cranes were used to load the containers onto trucks

Authorities said blockades set up at Gorleben had to be removed in order to make way for the police-escorted vehicles along the final 20-kilometer leg of their journey.

The containers of nuclear waste, originally transported by train before being loaded onto the vehicles, were delayed for more than 15 hours on Sunday after protesters chained themselves to a concrete pyramid that they had positioned on the railroad tracks near the town of Hitzacker. 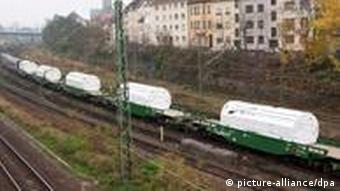 The train crossed the border near Saarbrücken

Police had to clear hundreds of anti-nuclear activists staging a sit-in on the tracks in a bid to halt the train. The nearly three-hour standoff took place in Harlingen, some 20 kilometers (12.5 miles) from Dannenberg.

At least 20 people were injured in the clashes. The protesters had reportedly attempted to remove stones from the railway line to destabilize the tracks.

Lower Saxony's interior minister, Uwe Schünemann, said on Monday that the "police had proceeded soberly against the sit-ins" in what "was without question the most difficult deployment since such nuclear transports were introduced."

Green party leader Claudia Roth, however, said over the weekend that the police had acted too harshly.

"I find the police deployment completely exaggerated," she said at a party conference in Kiel. She added that the anti-nuclear demonstrations were a legitimate "expression of civil disobedience."

Protests all the way

The 150 tons of reprocessed waste was carried by train from a nuclear fuel reprocessing facility in France to the town of Dannenberg in the northern German state of Lower Saxony, where it was then loaded onto the specially equipped vehicles and driven to Gorleben.

The German government says the waste will be stored only temporarily in Gorleben. But protesters fear the site may become permanent.

Last week, the transport was delayed by anti-nuclear protesters for more than 24 hours on the French side of the border.

Some 20,000 police officers were deployed to secure the "Castor" (Cask for Storage and Transport Of Radioactive material) convoy.

This shipment of German nuclear waste reprocessed in France was the last of its kind, due to the German government's decision to phase out its use of atomic energy following the disaster at Japan’s Fukushima nuclear power station earlier this year.

German Chancellor Angela Merkel decided to shut down eight of Germany's nuclear power plants in the wake of the Fukushima disaster, and later said all its remaining nuclear capacity would be taken off the grid by 2022. 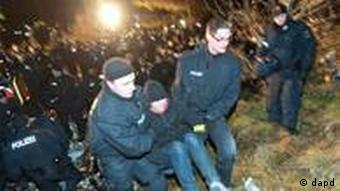 There were clashes between protesters and riot police

Starting in 2012, no German nuclear waste will be sent to France for reprocessing, with the waste simply being stockpiled instead. Nuclear waste reprocessing extracts reusable elements like plutonium and uranium, but does not reduce the radioactivity of the waste.

Germany's anti-nuclear movement is considered one of Europe's strongest. Protesters opposed the transport on several grounds, saying it posed a threat to residents and the environment near the train's path in the event of an accident or an attack.

They also said such transports draw attention to what they see as atomic energy's biggest unsolved problem: the disposal of waste. The waste being transported to the site at Gorleben will remain potentially hazardous for thousands of years.

A new EU directive says that radioactive waste and spent fuel rods from Europe's 143 nuclear reactors must in future be buried in secure underground bunkers. The new rules don't impose an export ban on nuclear waste. (19.07.2011)