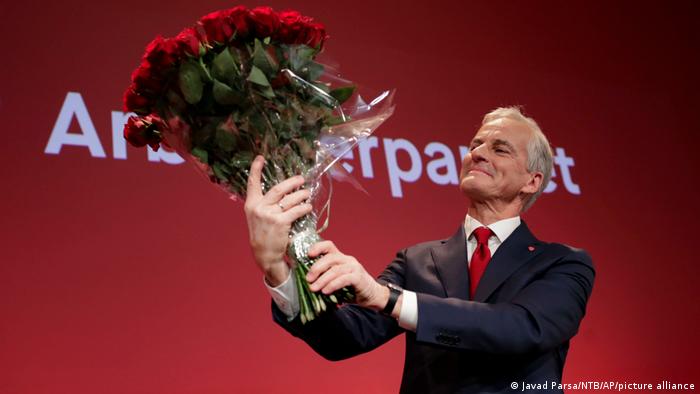 Norway's center-left opposition looked set to win a majority of seats in the country's parliamentary election on Monday, with conservative Prime Minister Erna Solberg conceding defeat and the leader of the largest opposition party declaring victory after preliminary results were announced.

"The Conservative government's work is finished for this time around," Solberg said in response to the results. She has served two terms as prime minister, starting in 2013.

The left-wing Labor Party, along with two other center-left parties, could manage to reach a majority of 89 seats out of 169 in total.

Labor is projected to win around 46 seats, just over half of what's required for a majority.

Labor Party leader Jonas Gahr Stoere, who is projected to become the next prime minister, said he will seek partners for a coalition government. The 61-year-old millionaire, who comes from a wealthy family, has campaigned against social inequality.

"Now we can finally say: we did it," Stoere said after the results pointed towards a left-wing win. "Norway has sent a clear signal: the election shows that the Norwegian people want a fairer society."

Stoere said he will attempt to build a coalition with the Center Party and the Socialist Left Party as a "Plan A." He also said he is willing to meet with any other parties seeking a change in government.

Why the Norwegian election matters

Norway is an affluent, oil-rich country that is not an EU member state. It has the world's largest sovereign wealth fund, thanks in no small part to the financial windfalls brought about by the country's significant fossil fuels sector since the 1960s.

The issues of climate change and economic inequality dominated campaigning, with the outcome set to influence oil activities in Western Europe's largest producer.

In August, when the Intergovernmental Panel on Climate Change report dropped declaring a "code red for humanity," the election campaign pivoted to matters of climate change, favoring parties that had put the issue at the forefront of their agenda.

Stoere's Labor Party wants a gradual, rather than immediate, reduction in the Norwegian economy's reliance on oil and gas sector, unlike parties further to the left that may form part of a ruling coalition.

After casting his ballot, Stoere told reporters, "I believe that calling time on our oil and gas industry is the wrong industrial policy and the wrong climate policy."