An inquest has said that ten "entirely innocent" people died in the 1971 shootings that became known as the Ballymurphy massacre. The coroner said the British army use "disproportionate" force. 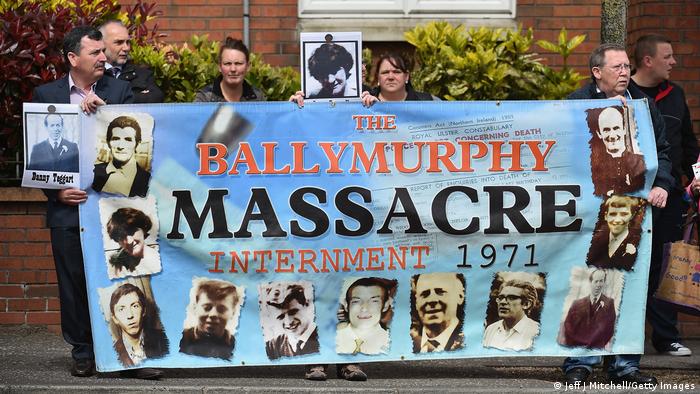 The British army shot dead at least nine "entirely innocent" people in Northern Ireland at the height of the Troublesnearly half a century ago, an inquest ruled on Tuesday.

The inquest, which has run for more than two years, was set up to establish the cause of death of ten people who died in the shootings in west Belfast in August 1971.

What did the inquest find?

The coroner, Siobhan Keegan, said British soldiers shot nine of those victims, which included a priest and a mother of eight.

But in her judgement, she ruled that she could not say who killed the tenth victim.

Questions also remain unanswered about the identity of the soldiers who shot many of the victims, the coroner said.

No one has been charged or convicted in connection with any of the killings, which happened during three days in the in the Ballymurphy area of Belfast — a sprawling housing estate of Catholics who opposed British rule.

The three days of unrest saw riots in the streets of the neighborhood.

What is the impact of the findings?

The coroner's inquest was not a criminal trial and did not single out any individuals as being responsible.

But Keegan can send her findings to Northern Ireland's Public Prosecution Service to consider whether to bring charges.

Such a move could spell problems for the British government, which will face pressure from former military veterans to protect those who served in the army during what became known as "the Troubles."

Pressure will also grow from the families and their legal teams for the kind of investigation they say should have taken place almost half a century ago.

The Daily Telegraph newspaper reported last Wednesday that the British government is set to introduce a ban on prosecutions of its veterans who served in the UK province.

In a briefing document released by Downing Street on Tuesday, officials said that "measures will be brought forward to strengthen devolved government in Northern Ireland and to address the legacy of the past."

"The government will introduce a legacy package that delivers better outcomes for victims, survivors and veterans, focuses on information recovery and reconciliation, and ends the cycle of investigations."

It effectively means that all prosecutions prior to 1998 and related to the Troubles will, in future, be banned under a statute of limitations.

During "the Troubles," some 3,600 people were killed in the sectarian confrontation between Irish nationalist militants, pro-British "loyalist" paramilitaries and British military that largely came to an end after a 1998 peace agreement.

But some riots broke out last March, leaving dozens of people injured, amid tensions over post-Brexit trade barriers between Northern Ireland and the British mainland.