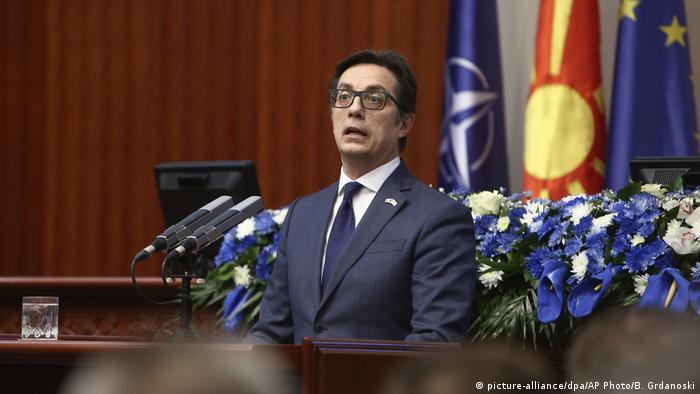 Macedonian members of parliament on Tuesday unanimously ratified an agreement to make their country a member of the North Atlantic Treaty Organization (NATO).

All 114 lawmakers present in the 120-seat parliament voted in favor, with none against or abstaining.

"By joining this alliance, we are not simply joining an international organization," Macedonian President Stevo Pendarovski told lawmakers ahead of the vote. "Membership of the world's most powerful military-political alliance is a privilege, but also a huge responsibility.''

A NATO flag was raised in front of the parliament building during the short ceremony.

North Macedonia's entry into the world's most powerful military alliance had been blocked by Greece for a decade over a name dispute.

But Athens dropped its opposition after the former Yugoslav republic agreed to change its name to the Republic of North Macedonia.

The country was previously known as the Former Yugoslav Republic of Macedonia, or simply Macedonia for short — a name it shared with a Greek province on its border, with both areas part of the historical region of Macedonia.

In return for renaming the country North Macedonia, Greece agreed to drop its objections to its neighbor joining NATO and the EU.

The accession protocol must be ratified by all 29 NATO members. Spain is the only one that has yet to signal its approval. A ratification vote is expected to be held in the Spanish parliament next month.

North Macedonia and its neighbor to the west, Albania, hope to start membership talks with the European Union that were blocked in October by France and the Netherlands.

German Chancellor Angela Merkel last month said she would push for a start to European Union accession talks for North Macedonia and Albania.

"Above all, we want to reach an agreement at the next European Council in March to start accession negotiations with Albania, and also with North Macedonia," she told reporters in Berlin at a meeting with Albanian Prime Minister Edi Rama, adding that their membership would also benefit the EU.