Pyongyang has demanded the extradition of the Seoul's top intelligence chief, a Chinese businessman, and unnamed CIA agents, accusing them of trying to poison Kim Jong Un. The North said its forces foiled the plot. 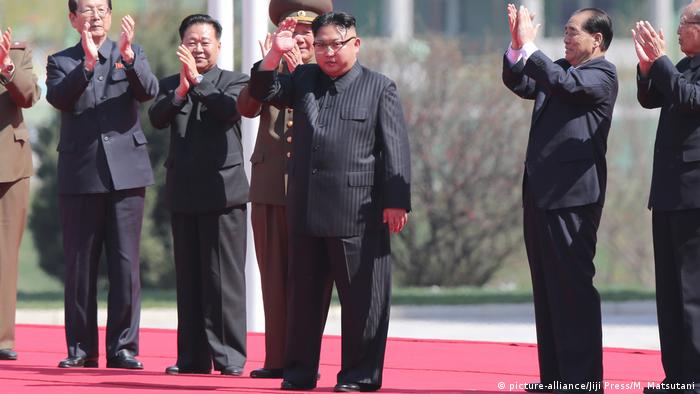 North Korean diplomats warn US of 'all out war'

Various North Korean diplomats have responded to the recent rising of tensions between the country and the United States. The statements followed US VP Pence's visit to the Demilitarized Zone on the Koreas' border. (17.04.2017)

North Korean officials described the alleged assassination attempt as a "declaration of war" and "state-sponsored terrorism" on Friday.

"We urge the relevant authorities to immediately detect and arrest and hand over" the accused individuals, who were "targets of due heavy punishment," deputy Foreign Minister Han Song Ryol said in a statement carried the state-controlled media.

"None of the brutal perpetrators of hideous state-sponsored terrorism aiming at the removal of the DPRK supreme leadership will survive on this planet," he added.

Previously, Pyongyang's powerful state security ministry accused South Korean agents of bribing and coercing a North Korean man of joining an assassination plot against Kim Jong Un. The media identified the man only as "Kim" and said that he at one point worked in Russia's far east. Many North Koreans work in Russia's timber industry under strong supervision of the Pyongyang government.

The would-be assassin allegedly met with South Korean agent Jo Ki-chol and Chinese businessman Xu Guanghai on the border with China, where they provided him with communications equipment and cash.

"These terrorists plotted and planned in detail for the use of biochemical substances including radioactive and poisonous substances as the means of assassination," Vice Minister Han said. "These biochemical substances were to be provided with the assistance of the CIA ... while the South Korean Intelligence Service was going to provide necessary support and funding for this attempt at assassination on our Supreme Leader."

According to North Korea, the plot to kill Kim Jong Un was discovered and foiled by the state ministry. Pyongyang now demands the extradition of the Chinese national Xu, and the outgoing director of South's National Intelligence Service (NIS) Lee Byung-ho, as well as the "masterminds" from the CIA. Lee is currently waiting for the parliament to approve his replacement, named by the new South Korean president Moon Jae-in.

On Friday, NIS said they had no information about Pyongyang's accusation. They previously said that claims of their involvement in the alleged plot were "groundless." The CIA and the White House declined comment.