North Korea's Olympic representative has given the strongest indication yet that the country will send a delegation to Pyeongchang. The move comes as the two longtime enemies prepare to hold rare talks.

North Korea's representative to the International Olympic Committee said on Saturday that the isolated state will "likely" compete in the figure skating at next month's Winter Olympics in South Korea.

Japan's Kyodo News service and broadcaster NHK reported that IOC official Chang Ung made the brief comments to reporters at Beijing Airport as he was leaving for Switzerland, where he could meet with his IOC counterparts.

North Korean leader Kim Jong Un first hinted during a New Year's Day speech that he may send a delegation to the Olympics, but it wasn't clear whether that meant athletes or just officials.

Chang went further, saying a North Korean figure skating pair would probably take part in the Games, which begin on February 9 in the South Korean city of Pyeongchang.

Figure skaters Ryom Tae Ok and Kim Ju Sik are the only North Korean athletes who have qualified. The duo won the communist country's first medal — a bronze — at the Asian Winter Games in Sapporo, Japan, last February.

The latest comments from Pyongyang come a day after North and South Korea — who are technically still at war following a three-year conflict in the 1950s — agreed to hold rare talks next week. Seoul agreed to send a five-member delegation to the truce village of Panmunjom, just north of the two foes' de facto border. 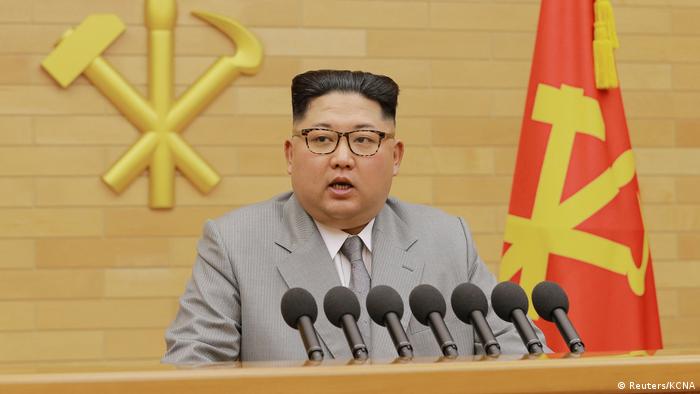 The restart of talks follows tit-for-tat threats of nuclear war and the trading of personal insults between Kim and US President Donald Trump over Pyongyang's recent missile tests and ongoing nuclear program, which have prompted additional United Nations sanctions specifically targeting oil.

Pyongyang last year carried out its sixth and most powerful nuclear test and test-launched three intercontinental ballistic missiles, as it attempts to develop nuclear missiles that are capable of striking the US mainland.

Trump on Saturday welcomed the first official talks between the two enemies in more than two years, saying he would like the bilateral talks to achieve more than just the North's participation in the Games.

"I would love to see them take it beyond the Olympics," he said at a news conference at the Camp David presidential retreat. "And at the appropriate time, we'll get involved."

Trump also took credit for bringing the two sides together, saying the talks wouldn't have happened without his toughness.

"If I weren't involved, they wouldn't be talking about Olympics right now," he said.

Also in recent days, the US and South Korea agreed to delay their joint military exercises until after the Games, apparently to help ease nerves.

And in a similar sign of reduced tensions, the two Koreas this week restored a cross-border hotline that was shut down in 2016 as tensions flared.