Amid an ongoing food shortage, North Korea has been hit by what it describes as its worst drought in a century. Fears are growing over the crisis as state constraints have caused international aid to simultaneously fall. 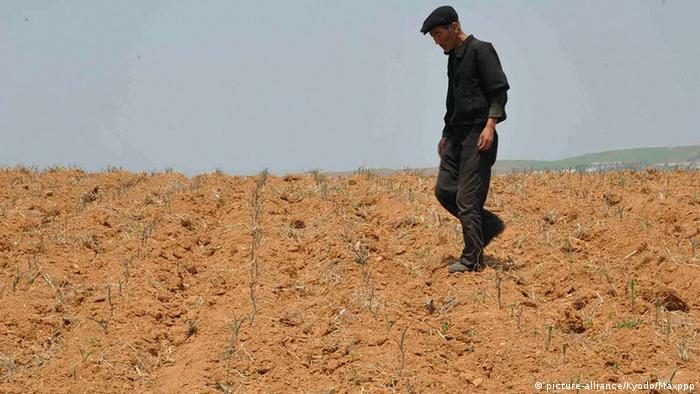 State news agency KCNA said on Wednesday that the drought was causing "great harm to the agricultural sector," with four granaries particularly affected.

"According to the hydro-meteorological authority there has been no rain in the (western) provinces of North and South Hwanghae," KCNA reported.

With water levels in reservoirs at their lowest level and rivers in the regions also drying up, the rice farming regions are struggling to meet demand as the grain must be submerged in water in order to grow.

North Korea also relies heavily on hydroelectric power and suffers from persistent electricity shortages, which can be drastically worsened by periods of no rain.

The state, officially known as Democratic People's Republic of Korea (DPRK), has now launched a campaign encouraging the public to help out on farms and is using mobile water pumps, run on diesel and longer pipes, to draw water into fields.

"Farm managers reported receiving training in dry rice planting techniques and other measures that they were trying to conserve water," said Linda Lewis of the American Friends Service Committee, a group that runs farm projects in the North.

Pyongyang's propaganda officials also produced two new posters and slogans earlier this month to spur on the fight against the drought.

"Let's mobilize the masses and fight with all our strength against the drought," read one poster which showed a smiling farmer gesturing towards a field of workers with red flags and spades.

Despite efforts to deal with the droughts, fears are now growing that the current crisis could worsen the country's chronic food shortages.

According to the United Nations (UN), almost a third of North Korean children under the age of five are stunted because of poor nutrition.

Since suffering a devastating famine in the 1990s, North Korea has largely relied on international food aid. Recent curbs on humanitarian workers and reluctance to allow monitoring of food distribution, however, have caused support to fall, with funding for UN agencies there falling to less than $50 million (44 million euros) in 2014, from $300 million in 2004. In April this year, the world organization called for $111 million to fund the country's crucial humanitarian needs.

Rain shortage in the South

Neighboring South Korea has also experienced a sharp decrease in rainfall in recent months. According to the country's national weather agency, South Korea's northern regions have seen around half the rain of an average year.

The country's Unification Ministry, responsible for ties with the North, did not comment on KCNA's report on Wednesday, however.

North Koreans living in South Korea say the North's military program is responsible for the country's poverty and hunger and they fear their countrymen in the North will not even find out the mission failed. (13.04.2012)

World stockpiles of nuclear warheads have dipped to 15,850 due to cuts by the US and Russia. However, nuclear superpowers have continued to modernize their arsenals. (14.06.2015)