None injured as German ICE train derails in Switzerland

A Deutsche Bahn Intercity-Express (ICE) train has derailed coming into Basel train station in Switzerland. None of the 500 passengers were injured as authorities search for clues as to the cause of the accident. 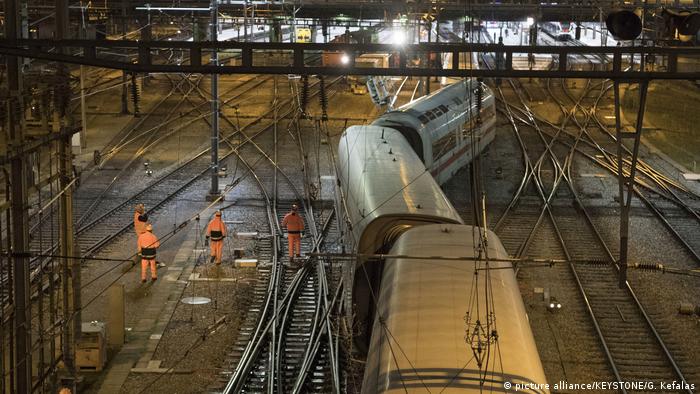 The cause of the derailment is not known, it said.

The derailed wagons of the high-speed train, which started in Hamburg and was heading for Zurich, remained upright and the approximately 500 passengers were removed before the train station was cordoned off.

According to a statement issued by Basel City authorities,nobody was injured but a pylon and a contact line were damaged.

The SBB confirmed the accident in a tweet, saying that some cars of the ICE75 (Hamburg Altona - Zurich) train had left the tracks at the entrance to the station. According to the tweet, there were no casualties and the passengers were able to leave the train via the platform.

Train operations between Germany and Switzerland - one of the most important rail routes connecting northern and southern Europe - were halted for several hours.

"It's a mess, everything is down, people are stressed and annoyed and telephoning,” one passenger told the German news agency DPA.

Basel Station was closed to traffic for several hours, but as of 9 p.m. local time (2000 GMT/UTC), SBB said that some services were returning to normal.

On May 1, an ICE derailed at Dortmund station, injuring two people.

Switzerland also experienced a rail accident in September on the Matterhorn Gotthard Railway in which 33 people were slightly injured.

Three people were also injured when a train derailed while pulling out of Lucerne station in Switzerland in March.

Terrorism was likely not the motivation behind an attack on a train in St. Gallen, police have said. The assailant and at least one victim have died. (14.08.2016)