Imre Kertész survived Auschwitz as a teenager. The Nobel Prize in Literature laureate described the horrors of the concentration camps in his novels. Still, he was fascinated by Germany's cultural history. 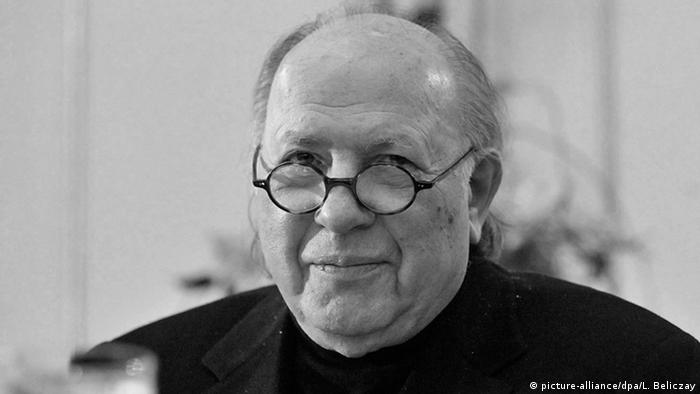 Kertész was 14 years old when the Nazis deported him from Hungary to the concentration camp of Auschwitz-Birkenau. He was later sent to Buchenwald, where the Allies liberated him in 1945.

Kertész, whose family was Jewish, then returned to Hungary. The trauma of his life, the Holocaust, is the main theme of his literature. His best-known novel, "Fatelessness," which he spent 13 years working on, is one of the most painful and brutal writings about the Holocaust.

'In the deepness of a pitch-black cellar'

What makes this novel so overwhelmingly haunting is its guilelessness: Totally unsuspectingly, a 14-year-old boy describes his deportation to Auschwitz and Buchenwald. It's a first-person narrative told from the naïve perspective of a child.

The young narrator tries his very best to do everything right while in the camp. He doesn't grasp the deadly reality of the gas chambers. Kertész does without detailed explanations - which adds to the horrors the reader feels. "I have written this novel like someone who struggles to feel his way towards the exit in the pitch-black deepness of a cellar," remarked Kertész about his novel, pointing out, however, that it should not be seen as an autobiographical work: "What I write, is not me. It is only one of the possibilities of me. "

But the Nazi dictatorship was not the only factor that had a long-lasting impact on Imre Kertész. After the Second World War, he lived through the Stalinist dictatorship in Hungary, and then the communist Kádár regime following the uprising of 1956. 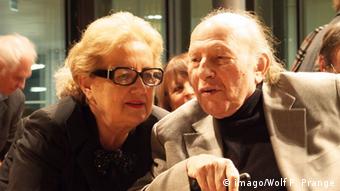 Imre Kertész is pictured with his wife, Magda, in 2012

The objective of Kertész has always been to unmask people in a totalitarian system. In his books, he describes a new type of person: "It was a type of man who either forgets, or falsifies, his biography without being aware of it. In these dictatorships, one got immersed in situations that were so fantastic that one could not immediately grasp them, and that's why one adapted to the situation in order to survive," explained Kertész in October 2013 in an interview with the Sunday edition of the Swiss daily, "Neue Zürcher Zeitung."

After 1956, his liberties as a person, and as a writer, were restricted in Hungary. During the Socialist era, he "thought of committing suicide every single day," said Kertész.

"Fatelessness" was rejected in Hungary, but then released by a state-owned publishing house in the country in 1975. At first, the impressive testimonial of a Holocaust survivor was ignored and hushed up as people in Hungary had a hard time admitting their country's fascist past.

Only in the 1990s, when his works were published in German, did Imre Kertész achieve world fame. In 2002, his literary career reached its climax: He received the Nobel Prize in Literature. Ironically speaking, one could add that it was his huge success in Germany that finally brought him the long-deserved recognition and appreciation. But Kertész saw no contradiction in that fact.

To Kertész, who had absorbed the works of Kant, Nietzsche and Thomas Mann as a teenager, Germany was a land of culture: "I received all my education in German," he said in an interview with the German weekly, "Zeit." In the 1990s, he even moved to Berlin for 12 years. And in 2012, he gave his archive to the Berlin Academy of Arts, a German institution. The reason he gave for that generous gesture was that he felt more understood in Germany than in Hungary. 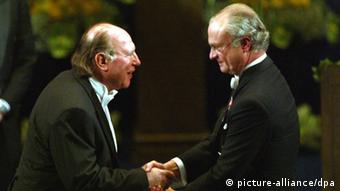 Imre Kertész received the Nobel Prize for Literature in 2002

And yet, he saw himself forced to return to Hungary in 2012 with his second wife, Magda, after having been diagnosed with Parkinson's disease. In interviews he frequently warned of what he called "the Holocaust industry."

"I have even seen former inmates of concentration camps making appearances at memorial events dressed in the uniform of inmates - that's just ridiculous. I have always distanced myself from everything that was intended to manipulate the masses," he told the German daily, "Frankfurter Allgemeine Zeitung."

Auschwitz was the theme of his life. And, fortunately, Imre Kertész has told us that story in his effort to fight against forgetting, a fate that the "fateless" in his novel feared most.

Germany is one of the last countries to release the Oscar-winning Hungarian concentration camp drama "Son of Saul" in cinemas. It raises the never-ending question of whether fiction can truly do justice to the Holocaust. (10.03.2016)

Ruth Klüger survived three Nazi concentration camps. Today, she is impressed that Germany is welcoming refugees. Klüger speaks to DW about Auschwitz, getting older and her speech in the German Bundestag. (26.01.2016)