No coalition in sight after fractured Belgium election

The far-right Vlaams Belang and the Flemish nationalist N-VA came out ahead, but the shape of Belgium's next government is far from certain. Northern Belgium leaned right, while in the south, the Socialists were strong. 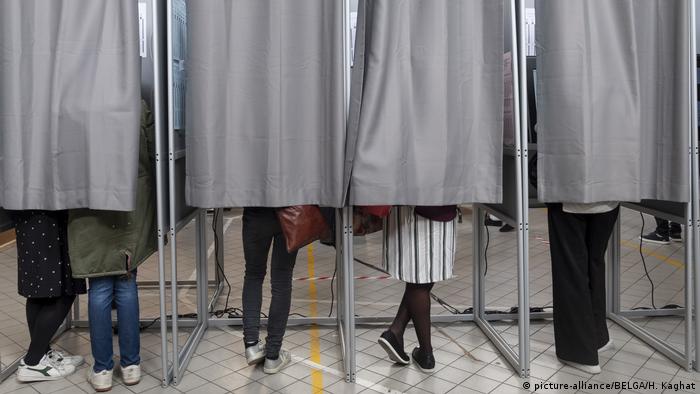 Belgium was looking at a tough political future on Monday, as results of the country's national elections delivered fragmented results divided on language lines, with little political consensus. This prompted fears that Belgium could once again face a lengthy period without a government, as it did when 2010 elections led to a record-breaking 541 days without a government.

Voting is mandatory in Belgium, and some 8 million voters went to the polls in the Flemish-speaking northern region of Flanders, the French-speaking southern area of Wallonia, and the capital Brussels, to elect their national and regional representatives at the same time as the country voted in EU elections.

The far-right Vlaams Belang party made major gains, jumping over 12 points to finish with 18.5% of the vote. However, most of Belgium's other parties have long maintained that they would not form a governing coalition with the right-wing populists.

'The situation is complex'

Despite this success, the more moderate Flemish nationalist party the N-VA looked likely to remain the largest party in parliament. However, it conceded defeat late on Sunday, as it tumbled from 20.26% in the last election to just over 16% on Sunday.

"The situation is complex: Wallonia voted strongly to the left, Flanders to the right," said N-VA's top candidate Jan Jambon.

N-VA had been part of Prime Minister Charles Michel's center-right coalition until December, when it pulled out of government in protest of Michel's decision to sign Belgium onto the UN Global Migration Compact in an attempt to woo far-right voters.

To avoid snap elections, King Philippe appointed a caretaker government with Michel at the helm that also includes the Christian Democratic CD&V and the centrist Open VLD.

N-VA has tentatively suggested that it would be open to coalition talk with Vlaams Belang.

Meanwhile, Prime Minister Michel's Francophone MR party fell to 7.5%, a loss of around 2 points, while Wallonia's Socialist party garnered 9.4% of the vote.

Belgium's foreign minister says his country will use its temporary UN Security Council seat to make the EU more influential on the global stage. Belgium and Germany are to scheduled to take up their seats on January 1. (31.12.2018)