Nikol Pashinian: The man behind Armenia′s protest movement | Europe | News and current affairs from around the continent | DW | 27.04.2018

Armenians are pinning their hopes on Nikol Pashinian, whose protest movement forced unpopular Prime Minister Serzh Sargsyan to resign. Now, the opposition leader says he wants to reform the country. 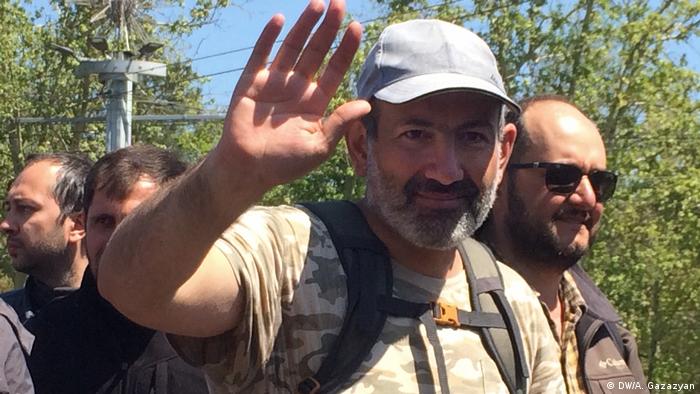 Nikol Pashinian is a man who until recently was hardly known to anyone outside Armenia. He sees Prime Minister Serzh Sargsyan's resignation this week as an important first step toward reforming the country, and now he wants parliament to make him Armenia's new leader in early May. Pashinian has repeatedly stated during rallies it is what the people want, and until then, the protests will continue.

Who exactly is the man who emerged from relative obscurity to become the star of Armenia's protest movement? And what does he stand for?

From a march to mass protests

Back in March, Pashinian, who serves as leader of liberal opposition coalition Jelk (Way Out), which won just 7.7 percent of the vote in last year's parliamentary elections, embarked on a long journey. Together with a handful of supporters, the 42-year-old set off from Gyumri, Armenia's second largest city, on a two-week march to protest Sargsyan's plan to run for prime minster — after having already served for 10 years as the country's president. Sargsyan's candidacy, which he had previously promised not to pursue, was made possible through a 2015 constitutional amendment that transformed Armenia's political system from a semi-presidential into a parliamentary republic. 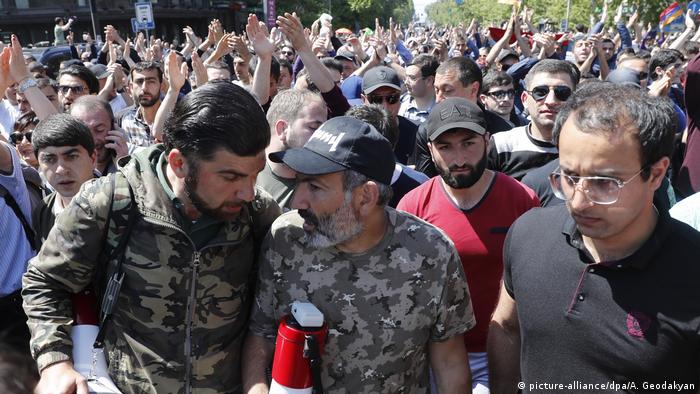 Pashinian was a prominent figure during the street protests in Yerevan

Fiercely opposed to this, Pashinian and his backers took the protest march throughout the country, until finally reaching the capital, Yerevan, in mid-April. The movement began to grow, and when Sargsyan was elected as prime minster on April 17, mass protests ensued. Tens of thousands of angry Armenians took to the streets, bringing Yerevan to a standstill. The protests, which remained peaceful, ultimately forced Sargsyan to step down. It did not take long before people began referring to the event as Armenia's "non-violent velvet revolution."

Pashinian's opposition to Sargsyan dates back much earlier than March of this year, however. He began his career as a journalist in the 1990s before transitioning into politics. He ran for parliament in 2007, but his party failed to win any seats. 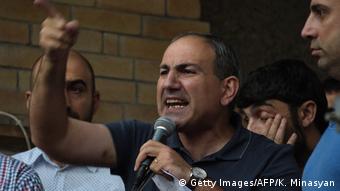 Pashinian worked as a journalist before entering politics

Pashinian's emergence on the political stage marked his opposition to Sargsyan, an entrenched political elite who had for decades shaped Armenian politics, first serving as a minister, then prime minister and ultimately president. When Sargsyan won his first term as president in 2008, a protest followed. Its violent suppression left 10 people dead. Pashinian was blamed as one of the instigators and was jailed for more than a year. After he was freed, Pashinian proceeded to switch parties and was voted into parliament in 2012 and 2017. That same year, he ran in Yerevan's mayoral election, securing 21 percent of the vote as the runner-up.

Read more: Armenians must forge their own future

According to Armenian political expert Ruben Megrabjan, Pashinian is the protest movement's unrivaled leader. "He was at the right place and the right time, and got the ball rolling," he says, pointing out that people followed Pashinian's initiative not because of his popularity, but because "the situation in Armenia had become unbearable." Pashinian and his backers say they are out to reform the country and unseat the ruling Republican Party, which is blamed for Armenia's rampant corruption and widespread poverty.

Unlike in Ukraine, the Armenian protests are not viewed as being connected to country's relationship with Russia or the European Union. Armenia remains a close ally of Moscow and relies on it for protection, especially with regard to its conflict with neighboring Azerbaijan over the disputed Nagorno-Karabakh region. In 2013, Armenia backed out of EU association talks and instead joined the Eurasian Economic Union (EAEU), a bloc of former Soviet republics under Russian leadership. 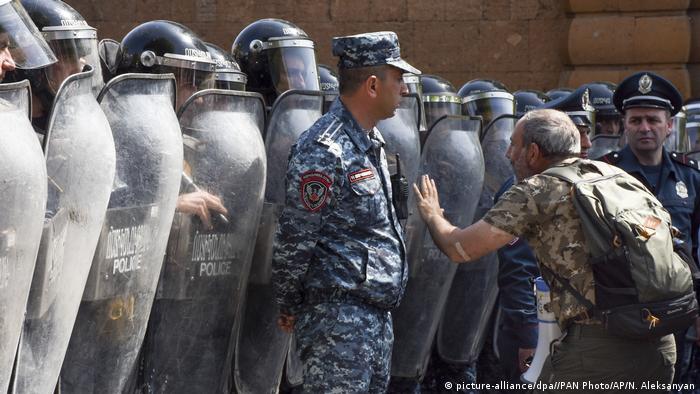 Pashinian and the protesters ultimately forced Sargsyan out of office

Pashinian recently told Russian newspaper RBK that the current protest movement was not a result of "any kind of geopolitical context." His election program, however, seems to contradict this claim at least somewhat. It calls for closer ties with the EU, and even considers the possibility of leaving the EAEU.

For now, Pashinian is focusing all his energy on domestic politics. He wants to take advantage of the momentum behind the street protests, but his status as Armenia's opposition leader has a flipside, too. Pashinian's coalition does not have sufficient support in parliament to command a majority, and is still dependent on backing from the previous ruling coalition, which fell apart after Sargsyan's resignation. If Pashinian fails to gain enough parliamentary support to become prime minister and fresh elections are called, he has said that his party may boycott the vote and urge Armenians to protest once more. After the initial victory of Sargsyan's ouster, the country may be gearing up for a protracted power struggle.