Soldiers in Nigeria have managed to free the women from a Boko Haram stronghold in the country's northeast. The army said the girls aren't those abducted from their school dormitories last year in Chibok. 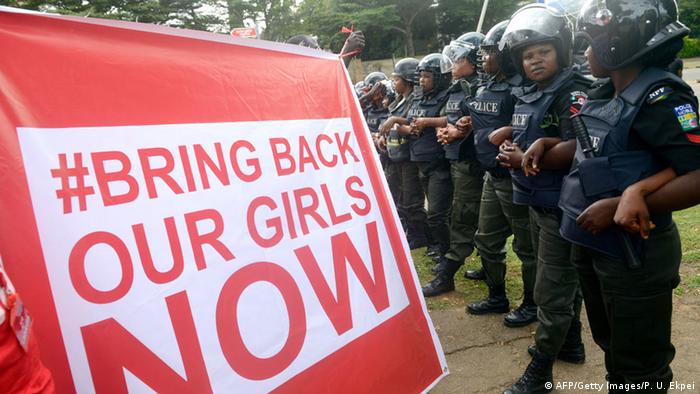 Nigerian troops destroyed and cleared four militant camps, and rescued 200 abducted girls and 93 women during an offensive against the jihadi group Tuesday, "but they are not the Chibok girls," army spokesman Col. Sani Usman told The Associated Press.

The prisoners have been found in Sambisa forest, in Nigeria's northeastern state of Borno, large parts of which have been occupied by the Islamist organization.

Several diplomats and intelligence officers had previously stated that at least some of the dozens of girls who were kidnapped in the town of Chibok last year causing international outrage are being held in the forest.

Despite the army's claims, community leaders from Chibok Pogu Bitrus said that they were still trying to check the released prisoners' identities. He said the town had learned of the rescue through social media, not from the military.

"We are trying to verify if there are Chibok girls among them. We are working hard to verify. ... All we know is this number have been rescued," he said.

His comments reflected doubts concerning the military, which has shared false information about the girls on several occasions. The army had previously claimed that some of the kidnapped girls have been rescued, which proved to be untrue.

The rescued girls and women will be checked on Wednesday to determine whether they had been abducted or if they were married to the Boko Haram militiamen.

"Now they are excited about their freedom," an unnamed intelligence source told Reuters.

A military source from Sambissa told the AP news agency that Boko Haram was using armed women as human shields, placing them at their first line of defense.

Outrage around the globe

Many women and girls have been abducted by members of the Islamist group, but the 279 schoolgirls abducted in April 2014 captured the world's attention more than similar Boko Haram crimes.

Nearly 60 girls managed to escape the terrorists, but more than 200 still remained in the Islamists' captivity. Boko Haram's leader, Abubakar Shekau, had threatened to "marry them off" or sell the girls as slaves.

The mass kidnapping and Boko Haram's threats sparked outrage around the world. Prominent personalities like US first lady Michelle Obama joined the Twitter campaign with the hashtag BringBackourGirls.

It is exactly a year since Boko Haram kidnapped nearly 300 schoolgirls from the Nigerian town of Chibok. There has been no trace of them up until now. DW’s Jan-Philipp Scholz fears that is not going to change. (14.04.2015)