Nigeria's military has claimed to have re-established control of swathes of the northeast of the country in an operation against Islamist militants. Several thousand troops were deployed last week for the offensive. 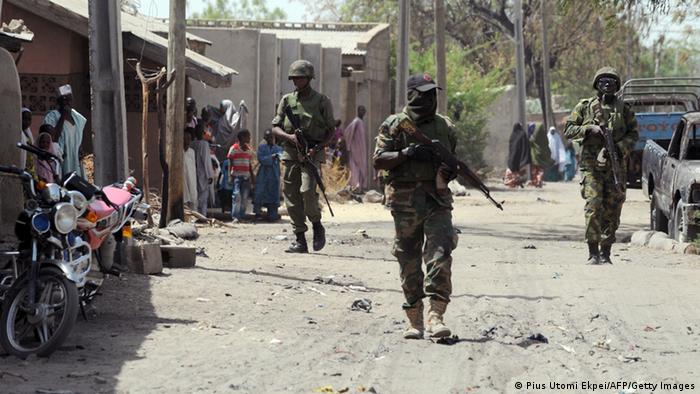 The Nigerian military said on Monday that it had regained control of five areas of the northeast of the country as part of its offensive against militants.

Thousands of troops were deployed to the northeast last week, with fighter jets and helicopters reportedly used in the bombardment of Boko Haram camps.

A defense ministry statement on Monday said the military had "secured the environs of New Marte, Hausari, Krenoa , Wulgo and Chikun Ngulalo."

"The troops are already interacting with locals and citizens assuring them of their safety and freedom from the activities of insurgents," the statement added.

Rights abuses by the Nigerian armed forces in the past have seen Western powers raise concern about the operation, with US Secretary of State John Kerry urging a "disciplined use of force in all operations."

An estimated 2,000 people were reported to have fled from border towns into neighboring Niger to avoid being caught up in the latest operation, according to the BBC. The AFP news agency reported that thousands had fled across the border into Cameroon.

However, a spokesman for Nigerian President Goodluck Jonathan lauded the progress made.

Doubts about Nigeria's state of emergency

Nigerian troops have moved to the north one day after the declaration by President Jonathan of a state of emergency in three northern states. Experts are skeptical as to whether this can curb the Islamist insurgency. (15.05.2013)

"The insurgents have been dislodged from their previously safe havens and camps while many have been apprehended, and their activities in the affected states have been brought to a total halt," he said. Jonathan launched the operation after having last Tuesday declared a state of emergency in three states: Borno, Yobe and Adamawa.

A number of curfews imposed over the weekend had been lifted by late on Monday, officials said.

The Nigerian government claims the operation is the biggest since the insurgency by Boko Haram began in 2009. Nigerian forces have pushed into remote semi-desert areas around Lake Chad, near to the border with Chad, Cameroon and Niger.

The military on Monday also said 120 suspected insurgents had been arrested while organizing a funeral in the city of Maiduguri for one of their leaders killed in "an encounter with special forces" the previous day. Insurgents were said to have had their paths of escape to neighboring Niger and Chad blocked.

Boko Haram has said it wants imprisoned members freed from custody and strict Shariah laws across the country. Nigeria's population of some 170 million is split roughly evenly between Christians in the south and Muslims in the north.