Following glitches in new election technology, many Nigerians will return to the polls for a second day to cast their vote. The presidential election has also been marred by an attack by suspected Boko Haram militants. 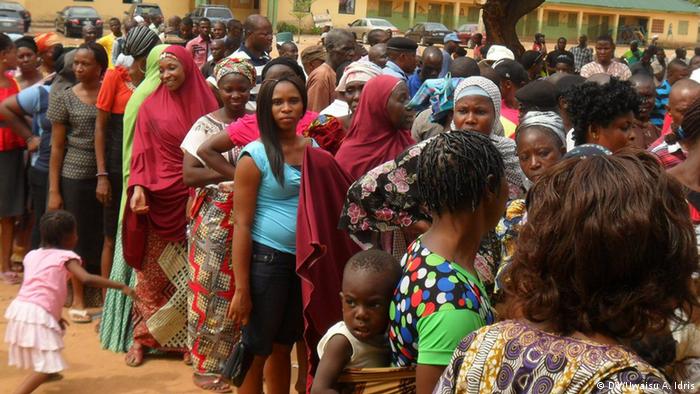 Borno state Governor Kashim Shettima said on Saturday that a group of militants had killed at least 23 people in the remote village of Buratai in the southeast of the state on Friday. News agency Associated Press reported the deaths of up to 41 people.

"I received a report that people have been killed at Burati town and five people injured. My Commissioner of Education participated in the burial of those killed," he told journalists after voting in Saturday's election.

The attack came on the eve of Nigeria's presidential election which has now been partially extended to Sunday. The extension came after many voters, including current President Goodluck Jonathan, faced technical problems with new biometric cards on Saturday which slowed down voter registration.

Despite a plea on Friday from UN Secretary General Ban Ki-moon for transparent and peaceful elections, violence also broke out elsewhere in Nigeria on Saturday. At least seven people were killed in a string of shootings, which witnesses blamed on Boko Haram militants in the northeastern state of Gombe. Three of the attacks were at polling stations.

Three people, including a soldier, were also fatally shot in southern Rivers state, and two car bombs exploded at polling stations in the southeast. According to police, no one was injured.

Following the announcement of the results in Nigeria's 2011 presidential election, 1,000 people were killed in ensuing clashes.

The ongoing presidential election will be one of the closest races in Nigeria's history - pitting Jonathan against former military ruler Muhammadu Buhari. Jonathan's ruling People's Democratic Party has dominated Nigerian politics since 1999.

According to the Independent National Electoral Commission (INEC), final results of Nigeria's presidential election will be announced within 48 hours of the polls closing on Sunday.

March 28,2015: Nigeria heads to the polls to vote for their next president and parliament amidst heavy concerns over the country's security. We bring you reactions and discussions from around the web. (28.03.2015)

Nigeria's military has confirmed that it has retaken the northeastern town of Gwoza, home to the headquarters of Boko Haram. The offensive is a crucial victory just a day before the country's presidential election. (28.03.2015)