Nnamdi Kanu, the leader of a Biafran pro-independence group, has been returned to Nigeria years after fleeing a trial. The spectre of full-scale civil war hangs over recent violence in the region. 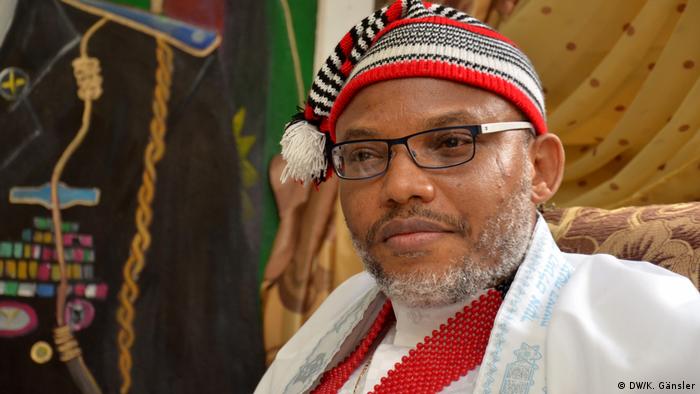 The leader of a group that has called for the independence of Biafra from Nigeria appeared in court again on Tuesday after having jumped bail and disappearing for several years, Nigeria's justice minister said.

Nnamdi Kanu founded the outlawed Indigenous People of Biafra (IPOB) movement that has called for civil disobedience to achieve a separate state for ethnic Igbos in southeast Nigeria.

Kanu and his group have been accused of fomenting violence and of being behind a recent spate of attacks.

Why was Nnamdi Kanu arrested?

The 53-year-old went on trial in 2015, but fled in 2017 after being released on bail. Justice Minister Abubakar Malami said that Kanu was arrested on Sunday, but did not give details of the location.

"Nnamdi Kanu has been intercepted […] He has been brought back to Nigeria, in order to continue facing trial after disappearing," Malami said in a statement.

Kanu's lawyer Ifeanyi Ejiofor confirmed the account, saying that his client had been "brought before the Federal High Court […] though without our knowledge."

Biafra independence is a sensitive topic in Nigeria

The separatist leader founded IPOB in 2013 while living in London. The movement called for civil disobedience to force the government to allow a referendum on independence.

However, his stance took a turn in 2015 during the World Igbo Congress in Los Angeles when he said: "We need arms and we need bullets." He was arrested later that year on a trip to Nigeria.

More than a million people died, mostly Igbos, during a 30-month civil war that was triggered by a unilateral declaration of independence for Biafra in 1967.

The region has seen a surge in attacks in recent months, with some 130 police officers killed in this year alone. In May Nigeria's security forces launched an operation to quell the violence which many fear may lead to a new war.