Nine people are reported to have died after Nigerian air force jets fired on a village in Yobe State whilst targeting Boko Haram militants in the area. 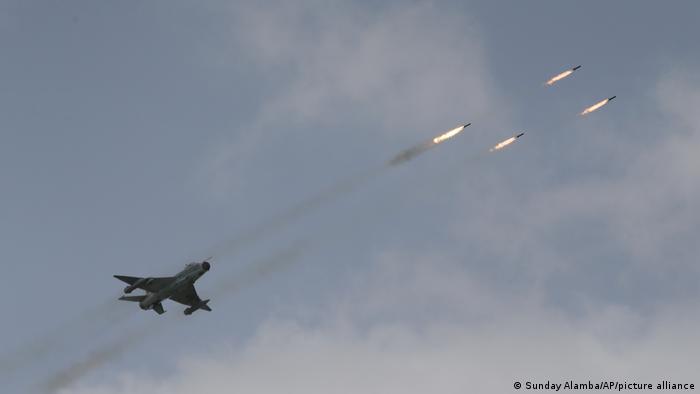 The Nigerian air force said Thursday it is investigating reports that one of its jets fired on civilians in a fatal incident, as it pursued insurgent fighters in Yobe State in the country's northeast.

The state's emergency response agency said nine people were killed and 23 others were injured as a village was fired upon.

Nigerian military spokesperson Edward Gabkwet said they had received reports that "some civilians were erroneously killed while others were injured." Gabkwet said that a board of inquiry had been set up to investigate the incident.

A health worker told news agency AP on condition of anonymity that he had seen a military truck arrive with at least 30 people with  various injuries.

The air force said an aircraft had been scrambled to the border area with Niger on Wednesday and was responding to suspected terrorist activity.

Yobe State Governor Mai Mala Buni was able to confirm the incident but could not give specifics. He said the state "will work closely with security forces to establish what happened."

An ongoing battle against Islamist insurgents

Security forces have been battling an Islamist insurgency for the past 12 years in Nigeria's northeast.

Fighting in the region has killed tens of thousands of people and uprooted nearly 2-million, leading to a humanitarian crisis in the states of Borno, Yobe and Adamawa.

There have also been previous incidents in which civilians have been killed in military operations over the years.

The country's military has faced severe criticism for these accidental killings, which haven't only led to the deaths of civilians.

In 2017 more than 100 people were killed when a refugee camp was accidently bombed.