Niger: Fighting the battle against desertification

Traveling through Niger, it is almost impossible to imagine that it was once densely wooded. Today, there's desert, sand dunes and flat savannah - but hardly any trees. Yet its desertification is partly man-made. 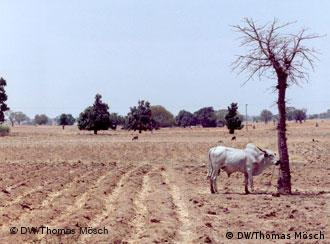 Desertification in Niger affects the people and animals

Desertification is such a problem in Saharan Niger that even small children are aware of the phenomenon. Niger recently earned the dubious title of coming in at the bottom of the Human Development Index.

Everything here rests on combating the encroaching sand. Niger is a country plagued by drought, poverty, population expansion, a massive education deficit, the division of arable land into small plots, the stagnated development of rural areas and non-existent energy resources.

It's no wonder then that people chop down the trees that are left that look dead and dried out anyway and take them for firewood to be able to cook the day's ration of millet.

The fight for survival

"It used to look different here," said farmer Ali Atikou. "There used to be trees and brushwood." 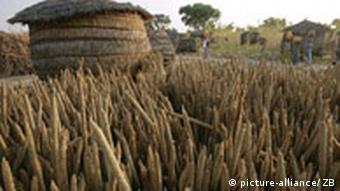 Only small parts of the land in Niger are arable

Today, there is nothing left to hinder soil erosion after the fertile top soil has been blown away by the wind. The sand fills the dry river beds and suffocates the water-wells and millet fields.

Politicians frequently deny the severity of Niger's predicament, but the country's population knows different and has to find a way to combat the drought. According to Harouna Sidikou, a sociologist at the University of Niamey, the situation in Niger could easily improve if people were prepared to change the way they think and the way they approach the land.

"The people here stick to familiar agricultural patterns: they divide their plots into the same size every year, they use the same crop varieties, and they eat the same food," Sidikou said. "That's what drives me crazy. They repeat the same devastating cycle over and over again. All they need to do is look at what they are doing, just once, and take some lessons from the previous year's disaster."

Despite Sidikou's dismal prognosis, people are taking steps against desertification to ensure their survival. One such movement is a local reforestation program run by the Anti-Erosion Initiative. 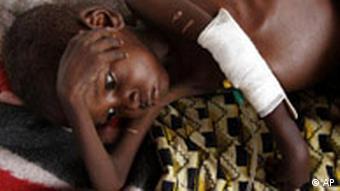 Malnutrition is one of the devastating consequences of deforestation

"We are training tree nursery gardeners, who are responsible for looking after the newly planted saplings," said the organization's representative Iro Nagoge. "At the same time, we have started travelling around, trying to educate people about their environment. We are trying to make people understand the devastating consequences of deforestation - both on them and their environment."

Nagoge said that Niger is in a very bad way. But the people here are proud and are not yet ready to give up. It's a sentiment shared by Simiri's mayor, Hadj Amirou Moussa Soussou.

"On ne va pas se laisser balayer par le vent," he said - meaning "we will not let the wind blow us away."

Listen to the international coproduction on desertification in Niger