Nicaragua's president, Daniel Ortega, and his wife and running mate Rosario Murillo, are poised to win Sunday's election. The couple is popular, but critics say they are authoritarian and seek family rule.

With a surging murder rate, the president has declared a state of emergency in prisons to stop execution orders from jailed gang leaders. In 2015, Central America's smallest country averaged nearly a murder an hour. (31.03.2016)

Opinion: Venezuela and Nicaragua, socialist dictatorships under a democratic guise

"It should look democratic - but we have to hold the reins," former East German communist head of state Walter Ulbricht once said. Venezuela and Nicaragua appear to function along those same lines, says DW's Uta Thofern. (03.08.2016)

Nicaraguan President Daniel Ortega was effectively re-elected to a third term in office even as domestic political opponents and the United States cast doubts on the results.

About two-thirds of the ballots from Sunday's election have been counted, according tot he Supreme Electoral Council (SEC) chief Roberto Rivas, who added that the incomplete results ensured Ortega's third-straight electoral victory.

Running with his wife, Rosario Murillo, as his vice presidential candidate, in a six-way race Ortgea captured 72 percent of the vote, versus 14 percent for his closest rival, according to the SEC.

Rivas put voter turnout at about 66 percent of Nicaragua's 3.8 million rgistered voters.The figure was hotly disputed by the poltiical opposition. The Broad Front for Democracy claimed "more than 70 percent" of voters stayed away from the polls.

"Today the people of Nicaragua said, 'Enough!'" the movement said in a statement.

Political analyst Bosco Matamoros said both the government and opposition figures were out of touch with reality. He estimated turnout was likely around 50 percent.

"Neither the results of the (electoral council) nor those of the opposition are acceptable because they don't match reality,"
Matamoros said. "And what they demonstrate is that we have a divided country that desperately needs a political understanding to keep this crisis from growing."

The US State Department said it, too, is "deeply concerned" about what it called Nicaragua's flawed electoral process.

"The United States is deeply concerned by the flawed presidential and legislative electoral process in Nicaragua,
which precluded the possibility of a free and fair election on November 6," spokesman Mark Toner said in a statement, accusing
the government of sidelining opposition candidates

But Ortega, the 70-year-old former guerrilla turned business-friendly leftist, said voters handed him a mandate to rule in peace; and Murillo's powerful role sets the stage for family succession.

"This is a vote for peace, for stability, for the security of Nicaraguan families," Ortega said, wearing a red shirt and a cream-colored jacket. "Some say that we don't have proper elections here, because we're not insulting each other, throwing messages of hate, banging the drums of death."

Earlier reports cited Nicaraguan officials as already declaring President Ortega the winner with only a fifth of the ballots counted. Ortega's Sandinista National Liberation Front (FSLN) had 71 percent of the vote, Roberto Rivas, head of the country's Supreme Electoral Council told reporters. Ortega's main opponent, the center-right Liberal Constitutionalist Party (PLC) candidate Maximino Rodriguez, was a distant second with 16.4 percent of votes. Turnout based on the partial tally was 65 percent.

But the main opposition bloc, the Broad Front for Democracy, disputed this, saying its internal polling indicated that "more than 70 percent" of voters heeded calls to boycott and did not cast ballots.

Ninety seats in the country's 92 member parliament are also being contested, the other two seats going to the president and the runner-up.

Ortega, a former leftist guerrilla leader who deposed dictator Anastasio Somoza, whose family ruled for much of the 20th century,  led the Sandinista guerrilla movement before becoming president in 1985 for a five-year term that ended with an electoral defeat in 1990.

The 1980s were marked by a bloody conflict that spilled across Central American borders, pitting Sandinistas against US-backed right-wing Contras, whose death squads waged a violent campaign that saw thousands of civilians kidnapped, tortured and murdered.

After 17 years in opposition, Ortega returned to the presidency in 2006 and solidified his control, and that of his Sandinista National Liberation Front (FSLN) over one of Latin America's poorest countries. 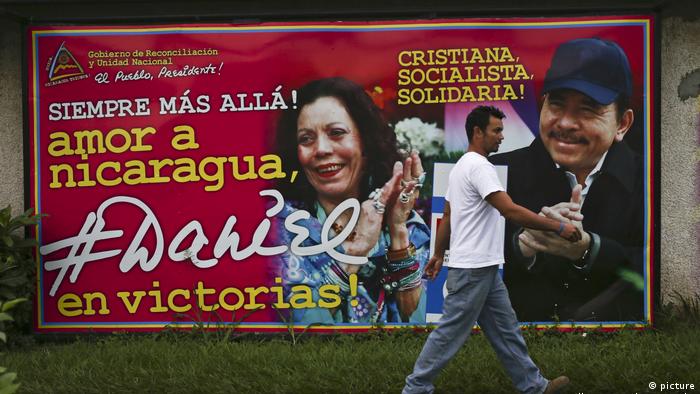 Ortega's left-wing policies have gained him the support of many of the country's poor. Nicaragua has enjoyed moderate economic growth and avoided the endemic violence of neighboring El Salvador and Honduras, earning him further plaudits.

Yet his critics point to a strong-fisted man who has connived to sideline the opposition and secured his influence and that of his allies over businesses, the military, media and state institutions.  A court decision allowed Ortega to be reelected in 2011 despite a one-term limit. Congress later changed the constitution to allow unlimited presidential terms.

In June, the Supreme Court ejected a leading opposition figure from his own party, a move that prevented him from running in this election. In another move in August, more than 20 opposition members of parliament were kicked out of office when they resisted a government-appointed leader for their party.

Some of the opposition called for a boycott of the election, hoping that a low voter turn out will help delegitimize the vote.

A reclusive leader who rarely mingles with the people or talks to the media, Ortega has been accused by critics of ruling the country through his family, just as did the Somoza regime he toppled in 1979.

His 65-year-old wife Murillo, with whom he has seven biological and two adopted children, is the government's spokesperson and the minister who sets the government agenda.

Many view Murillo, the public face of the regime, as sharing power with Ortega. By becoming vice president, her power would be formalized and possibly lead to her taking over from Ortega either if he steps down, or in the next election in 2021.

"For the past 10 years, Mrs Murillo has assumed on many occasions the functions of head-of-state," Veronica Rueda Estrada, a Nicaragua expert and professor at Mexico's Quintana Roo University told the Agence France-Presse news agency.

"Things will definitely continue like that and it's possible they will even increase, with the variable that after November 6 she will have the legitimacy of being elected," she added.

Murillo's critics, including former allies of Ortega, describe her as a hard working and tough women who has systematically sidelined people around the president while acting as a gatekeeper on decision making.

But the first lady is also popular, in part for her role in pushing social policies that have benefited the poor.

The EU said Rosario Murillo, the first lady and VP, is one of 14 individuals responsible for "serious human rights violations" ahead of Nicaragua's election this year.

US bans President Daniel Ortega and Nicaraguan officials from entry to the US 17.11.2021

US President Joe Biden barred Nicaraguan President Daniel Ortega and other officials from entering the US. The move comes after a widely condemned presidential election on November 7.

Daniel Ortega is vying for a fourth term as Nicaragua's president. But the upcoming election is a farce, with leading opposition candidates barred from running, says DW's Gabriel Gonzalez.