Protesters took to the streets in Nicaragua's capital, but were met with repression. Protests have been banned by authorities since last year, when an anti-government movement swept the nation. 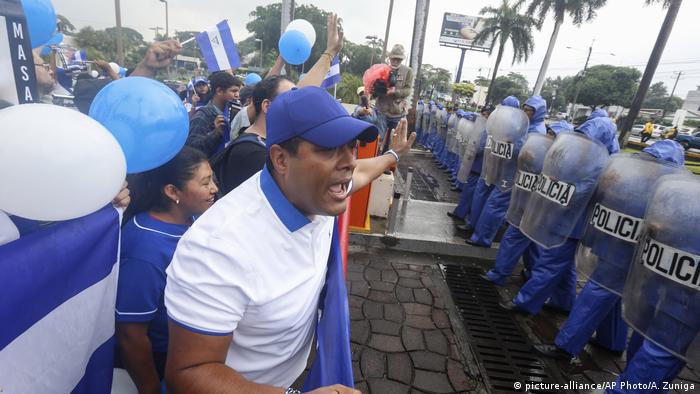 Anti-government protests in Nicaragua were thwarted by police on Saturday, as demonstrators faced a barrage of tear gas and stun grenades.

Protesters had taken to the streets to condemn the death of teenager Matt Romero during a march last year. They also demanded fresh elections to replace President Daniel Ortega.

Opposition leader Felix Maradiaga said protesters were calling for a "halt to repression and the murder of farmers" and demanding that authorities "free more than 120 political prisoners."

Nicaraguan authorities have banned opposition protests and accuse its activists of trying to overthrow Ortega's government.

Read more: Caught between floods and drought: Farmers in Nicaragua living in uncertainty

The embattled president has faced stiff opposition since April 2018, when a pension reform plan sparked regular demonstrations and calls for his ouster. Hundreds of Nicaraguans have been killed, imprisoned or forced into exile since the anti-government protests began.

Carrying blue and white balloons, the colors of the country's flag, protesters gathered at several locations in Managua, chanting "We are not afraid" and singing the national anthem.

"They know this is a people they can't shut up, they can't turn off, and we're going to continue the fight," said protester Jose Dolores Blandido.

Opposition leader Ivania Alvarez said that Ortega had to leave and that "there is no way he can remain by force."

In a tweet, the Inter-American Commission on Human Rights (IACHR) confirmed that injuries took place at the protest, posting a video from the scene.

The IACHR condemned what it described as "state violence against protesters."

The government of Nicaragua has barred public protests and gone to great lengths to quash dissent, all while holding talks with the opposition. The talks were mediated by the Catholic Church and led to the release of some prisoners.

But the opposition's key demand of early elections has so far been ignored by President Ortega.

Nicaragua's government has released 50 people arrested during a year of anti-regime protests. However, the new amnesty law also protects police and supporters of the government who assaulted demonstrators in 2018. (11.06.2019)