Jan van Eyck's Ghent Altarpiece is almost 600 years old. It has been damaged, restored and has changed hands on numerous occasions. It was once stolen by Napoleon and looted by Hitler. Considered a revolutionary artwork due to its painterly realism, it has long been the subject of research by art historians.

After all these years, we might assume that most of the alterpiece's secrets have been revealed; however restoration work carried out by the University of Ghent and numerous other institutions beginning in 2012 is behind a new sensational discovery. 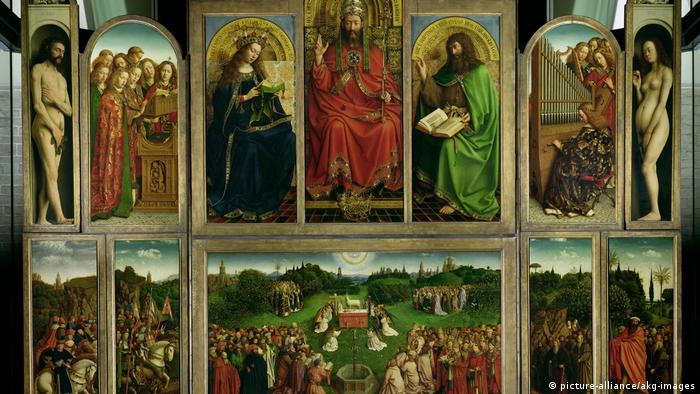 Lamb with a human face

It turns out that the lamb that appears in the central panel also known as Adoration of the Mystic Lamb, and which is a symbol for Jesus Christ, was painted over several times during early restorations in around 1550.

Indeed, around 70% of the alterpiece created by Jan van Eyck and his brother Hubert between 1426 and 1432 has been painted over. Now restorers have removed five centuries' worth of layers of paints and revealed the original van Eyck lamb for the first time.

Surprisingly, it resembles a human as much as a sheep, and seems to be staring back at and judging the viewer. The researchers have yet to pinpoint the motivations for van Eyck's unorthodox depiction, but the public can judge for itself when it goes on show on February 1 at the Museum of Fine Arts, Ghent. 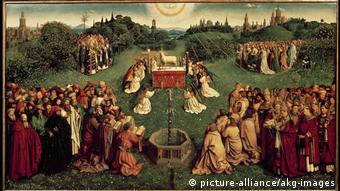 At the center of the alterpiece: 'Adoration of the Mystic Lamb'

Till-Holger Borchert, Director of the Municipal Museums in Bruges and one of the curators of the Ghent show, told DW that the find is a major revelation. "You have to imagine that you keep looking at the 'Mona Lisa' and suddenly she has a beard," he said.

"It was a shock for everybody — for us, for the church, for all the scholars, for the international committee following this project," said Hélène Dubois, head of the restoration work, in an interview with The Art Newspaper.

She called the style of presentation "comic-like," saying that nothing comparable had ever been discovered in early Dutch painting.

The anthropomorphic lamb's head has quickly created a lot of buzz, and sometimes criticism, on social media.

"Hubert and Jan van Eyck could paint hands realistically (that's really complicated!), but not lamb faces … see for yourself," read one tweet.

Also on twitter, the lamb restoration was called a "mistake," the user stating that "Whoever painted over it was absolutely right."

Countless internet memes themed around the restored lamb have sprung up, including a Twitter account called "Ghent Mystic Lamb."

While the lamb effigy is currently in the spotlight, other elements of the extensive restoration are just as remarkable: including the fact that the alter colors are now bright and radiant again.

Jan van Eyck portrayed the world in the 15th century in a close-to-nature manner, with an almost photographically accurate realism. This is why he is also considered the founder of modern painting. 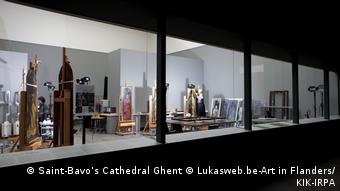 In the Museum of Fine Arts in Gent, you could look over the shoulder of the restorers

The story of the altar, which consists of twelve huge individual panels, some of which are painted on both sides, is a real art thriller. Over the course of centuries, it has been disassembled and taken away several times.

It was installed in 1432, and even the painter Albrecht Dürer found only words of praise for the work some decades later.

In the 16th century, the altarpiece survived the iconoclasm of the Calvinists, who sought to destroy representations of God and saints. Two hundred years later, those panels depicting Adam and Eve had to be removed because Emperor Joseph II allegedly found their nakedness offensive.

Napoleon then confiscated the middle part of the altar at the beginning of the 19th century and exhibited it in the Musée Napoléon, today's Louvre. After his defeat at Waterloo, it returned to Ghent.

Saved in the nick of time

In 1821, a large part of the altarpiece was legally sold to Prussian King Friedrich Wilhelm III in Berlin. Following the First World War, Germany was required to return the panels according to the Treaty of Versailles. 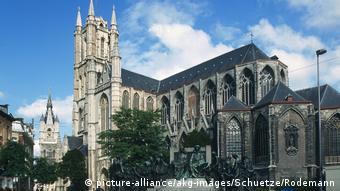 A part of the altar has already returned to the St. Bavo Cathedral. From October it can be seen there in its entirety.

Belgium finally reunited the panels in Ghent's St. Bavo Cathedral. But the next adventure for the art treasure was already waiting around the corner: In 1934, the panels with the portrait of John the Baptist and that of the "Just Judge" were stolen. The latter is still missing today.

Ten years later the tale of the altarpiece led to the Austrian salt mine near Altaussee. It was there that the National Socialists took works of artthat had to be temporarily stored for the planned "Führer Museum" in Linz.

Parts of the van Eyck altar also became part of this looted art. At the end of World War II, the works were at risk of destruction as Hitler preferred to see the looted works of art destroyed rather than landing in the hands of the Soviet Army. He actually had given the order to blow up the gallery before the imminent defeat — the dynamite for this was already in place.

The Monuments, Fine Arts, and Archives Section of the US Army, which was assigned to protect cultural assets during and after World War Two, thwarted the plan just in the nick of in time — such daring was protrayed in the 2014 film, Monuments Men. 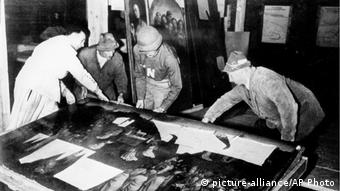 Barely saved: The Monuments Men unearth the Adoration of the Mystic Lamb

To mark the end of the restoration work on the Ghent Altarpiece, the Flanders region is honoring Jan van Eyck with a special focus this year: "OMG! Van Eyck was here" is the theme. The highlight is the show "Van Eyck. An Optical Revolution" at the Museum of Fine Arts Ghent.

It brings together more of the artist's works in one place than any other exhibition ever before — ten of the total of 20 that can be attributed to Van Eyck. In addition, around 100 works from his studio, copies of lost works and works by his contemporaries from the late Middle Ages are presented.

The highlight, however, is the restored Ghent Altarpiece with its human lamb, which can be explored in more detail in the picture gallery above.

Culture Minister Monika Grütters has handed over the painting, by artist Thomas Couture, back to Jewish heirs at a ceremony in Berlin. The canvas was stolen from French politician Georges Mandel during World War II. (08.01.2019)

An exhibition in Frankfurt's Städel museum explores the work of the Flemish painter, as well the precursors and contemporaries who influenced him. Rubens dominated the 17th-century art world like perhaps no other artist. (08.02.2018)

Are social media thought-police finally a reality? A clip of two official-looking men badged as 'fbi' who stop people from viewing nude art in a Belgian gallery has gone viral. But is it censorship, or a publicity stunt? (25.07.2018)

Looted, burned and hidden: Jan van Eyck's Ghent Altarpiece had an eventful history over the centuries. But the revolutionary realism of the paintings remains just as spectacular. (28.01.2020)

A selection from 'Making van Gogh: A German Love Story'

The Frankfurt Städel Museum features works by the iconic Dutch painter alongside paintings by Germans who were inspired by his work. (23.10.2019)

Renaissance painter Pieter Bruegel's detailed depictions of peasant life from the 16th century are filled with humanity and unusual irony. DW revisits his work on the 450th anniversary of his death. (09.09.2019)