Newcomers impress as Germany's women cruise to victory over Greece

After a long wait, Germany finally got back in action. With qualification for the 2022 Euros already confirmed, the pressure was off against Greece. Nevertheless, some new faces were keen to take their chance.

Even though this game was effectively a freebie for Germany, you wouldn't have known it watching the team warm up before kickoff in Ingolstadt.

While the guests juggled balls and took frequently wayward shots at goal, the German pre-match routine was a frenzy of high-intensity, close-quarters possession drills. It lasted until long after the Greeks had disappeared for the warmth of the changing rooms. When the time came for the hosts to head inside, the substitutes formed a guard of honor for the starting eleven, who literally sprinted down the tunnel. There was no sign of Germany taking it easy.

Given that Voss-Tecklenburg said beforehand it was more fun playing teams who made it difficult in all areas, it's unclear how much she will have enjoyed watching her side dominate the first half. 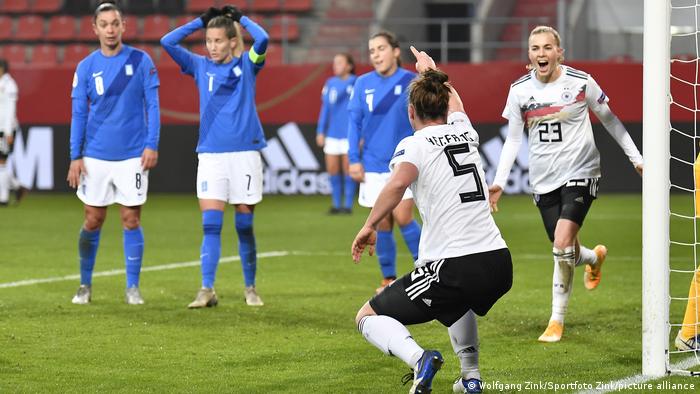 As a freezing cold fog descended on the stadium, Germany moved inevitably into the lead. Marina Hegering’s opener was the culmination of a quarter of an hour of steadily building pressure, the third or fourth genuinely dangerous chance that the home side had had.

With so little to do, stopper Merle Frohms had a job on her hands just keeping warm. She paced higher and higher up the pitch, calling loudly to her teammates; plenty of German could be heard echoing around the empty stadium, but very little Greek. The hosts continued to grow into the game, daylight dwindled, and so did any lingering hopes the guests had of snatching a surprise result.

Encouragingly, it was a relative rookie who put the result beyond all doubt before halftime. Eintracht Frankfurt striker Laura Freigang made it two, three, and then four-nil to Germany, completing a first-half hat trick on only her third appearance for the national team. 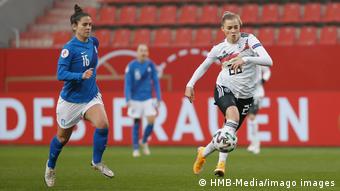 Voss-Tecklenburg had promised plenty of rotation ahead of the game, and by the final whistle, she had made full use of her five substitutions. Paulina Krumbiegel, who received her second cap after replacing Klara Bühl at the interval, was particularly impressive down the left wing. The 20-year-old Hoffenheim winger was involved in both second-half goals, providing a deft assist for Linda Dallmann before netting one of her own in the dying seconds.

"We take it just as seriously, whether we’re facing a big country or a smaller one," Dzenifer Marozsan told DW afterwards.

While Germany were relentless from start to finish, they availed themselves of the opportunity to give some relatively new players some playing time. Freigang and Krumbiegel though, more than repaid their coach's confidence, and impressed veteran Marozsan.

"We have a lot of young players, who are very talented, and they bring freshness into the team," Marozsan said.

When hat-trick heroine Freigang came off in the closing stages, she was of course denied the courtesy of a standing ovation. The empty stands were a constant reminder of the extraordinary circumstances in which this game was taking place.

"We don’t take it for granted that we can play football in the current situation," Voss-Tecklenburg reflected ahead of the match. "We hope that by doing so, we can offer people out there a measure of joy and normality."

Less than two weeks after the German men’s team received a historic 6-0 hiding in Seville, Voss-Tecklenburg's women gave German supporters something a little more like what they're used to.