Berlin's art scene is world-famous for its size and diversity but it's also a loose, uncoordinated entity with nothing bringing together its dispirate strands. That is, until Artconnect Berlin went online. 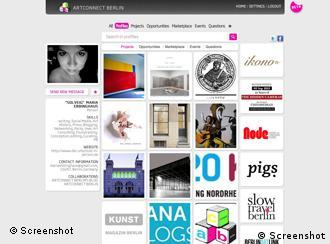 Berliners can now search for their ideal collaborator online

Cheap rents, a wealth of studio space and a tangible bohemian flair which you can feel on the street; there's much to recommend Germany's capital as a major European arts center, but for the thousands of budding creators who flock here every year, it can be difficult to find their feet and interconnect with other members of the scene.

This was the problem facing Spanish-born Julia Mari Bernaus when she first put down roots in Berlin.

"There are so many people in Berlin who are interesting and have incredible skills but to find the right people is not always so easy," she said. "I also realized that we're not connected in any way. There's no central point for the creative scene and I wondered how I could find all these people and put them all together."

All in one place 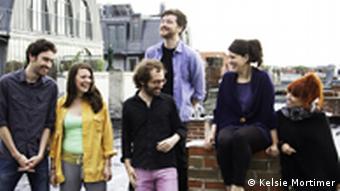 Julia (seated) and the Artconnect team

She found the answer, quite naturally, online and launched Artconnect Berlin at the end of July. Berlin's artists can log on and create a personal profile complete with online resume and samples of work in pictorial or video form.

Users can also tag themselves based on their skills base to make it easier for potential collaborators or employers to find them.

The aim of the site is to generate more communication within Berlin's art community. A ready-made network can be a valuable resource, particularly for projects with tight deadlines where there is no time to waste looking around for potential partners.

"I worked on a project and was responsible for finding people and that took up a lot of time because you had to post and reply to ads on many different sites," said Julia, "If you could just put one ad where you know there's all this information concentrated, I think that would save a lot of time. I dreamed of having something like that at the time."

One person who knows only too well how easy it is to waste precious project time tracking down collaborators is multi-disciplinary artist Martin Backes.

"The opportunities that you had before was asking friends or going to the Internet and looking for people and the problem with this is mostly that you don't know them," he said. "I think the good thing within Artconnect is that you can tag people so that you can see what they can do and who they've worked for."

New on the scene

A relative newcomer to Berlin's creative scene and recent addition to the Artconnect Berlin database is musician Simonne Jones who relocated to Germany's capital from Los Angeles about a year ago. She was able to compare the difficulties of finding the right people in Berlin compared to some of the US cities she has lived and worked in.

"Berlin has a very interesting, underground art connectivity that is really friendly for artists that are starting out," she said. "It's very inviting for the starting artist, but it's also very loose and very difficult to just find things because there is no network."

She also thinks that the speed with which it is possible to find people on Artconnect frees up artists to do what is most important: create. 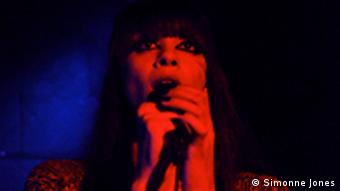 Making music or people-searching? Simonne Jones knows which she'd rather do

"There's a lot of administrative things in music that I have to do but I don’t like to do," she added. "I'd rather just spend my time locked in a room making music all day. I would love to just be able to type in, 'I need someone who is specialized in Abelton, Macs for Live and knows how to create midi instruments,' and do a search and find a number of people and just be able to connect and work with them."

So far the response to Artconnect Berlin has been very positive and site founder Julia Mari Bernaus doesn't think it's going to have too many problems reaching its audience.

"We see it becoming a much more complex website. We see it becoming the central point for Berliners to develop the practical part of being an artist in Berlin," she said. "We hope to create that core that doesn't exist in the city."

What does art have to do with taste?

Beauty is in the eye of the beholder and taste is, well, debatable. An art exhibition in Baden-Baden shows how presentation, demand and money define trends and matters of taste. (11.08.2011)

British historian and writer Stephen Barber is obsessed with Berlin. His latest book, "Walls of Berlin" documents the city's transitory nature - but isn't really about the Wall. (08.08.2011)

African artists’ creations shape the continent’s diverse creative tapestry. We meet them in Congo, Ghana and Nigeria, where they bring their ideas to life.