The Berlin Wall cut the city in two for nearly 30 years. After it was built, East German soldiers took pictures documenting the zone between East and West. Their pictures are now included in a provocative exhibition. 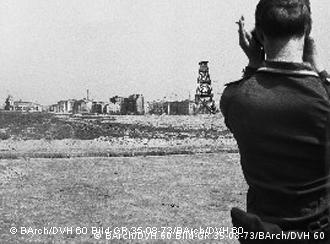 The soldier in the picture is young. He is smoking, looking at the dreary expanse, bordered by brush and a few scattered buildings, that opens in front of him.

But he's not supposed to be in the picture at all - a colleague may have photographed him by accident. The only subject of the photographs was supposed to be the Wall, or to put it better, the makeshift blockage that had been placed between East and West Berlin in the 1960s: rubble, bricked up rows of houses, slabs of wood, concrete and barbed wire.

Daring people managed to make it from East to West Germany again and again after the city was divided, but the East German government was out to stop them. So the border patrol stations needed to work perfectly, and to help them do so, members of the border control were instructed to document their status - meter by meter, all across Berlin.

Around 1,200 of their negatives were forgotten over the years, but photographer Arwed Messmer and writer Annett Gröschner happened upon them in a cardboard box in a military archive in Potsdam, just outside of Berlin. Their unique find is now on display in Berlin in an exhibition titled "The Other View. The Early Berlin Wall."

For the show, Messmer digitalized the photographs, creating around 300 panoramic images. The result is 200 meters (656 feet) of striking documentation, showing the complete Berlin border - before construction began on the Wall's final and most well-known form in 1975.

It's an inhumane wound inflicted with raw violence on the city: from Potsdamer Platz, whose emptiness was captured in the photograph with the smoking soldier, across the haunting facades of unused houses to the city's rivers and canals, watched over by guards in pieced-together towers.

Gravestones in one of the city's cemeteries were turned into seats, Messner noted. The border guards worked quite literally among the dead.

Glimpses of the West

They looked attentively toward West Berlin, which in the mid-1960s looked desperately bleak, still wrought with destruction from World War II. The soldiers' view hardly seemed like the "Golden West." But the West was free, and the East German border patrol could sense it - and not just while recording the taunts yelled at them from the other side of the wall.

Author Annett Gröscher looked through the remarks they wrote down, writing them on panels that are included in the exhibition, sometimes as titles to the images shown.

When someone from West Berlin shouted "Ulbricht has to go!" - a reference to East German official Walter Ulbricht - the episode was recorded as an ideological diversion. When young women would undress in front of the border guards - a rather popular trend at the time, and after all, the guards could not come over to them - the border personnel noted it as an attempt at making contact. And cigarettes thrown over the wall were officially recorded as "gifts," with the brand Ernte 23 being especially popular.

In the early years of the Wall, newspapers and magazines were also frequently tossed over the wall, but the young border patrollers had to think long and hard before reading them. They were, of course, also under surveillance, and any infractions they committed were recorded.

"He listened to western radio broadcasts in the boat," or, "He was discovered sleeping at the Ostkreuz station and couldn't be awoken." Many such infractions were met with punishment. One soldier, for instance, traced figures in the snow and earned a hefty punishment for it.

The border area was always supposed to be kept clean, raked and free of people. After all, allowing people into the border area increased the danger of an escape. The exhibition takes up the stories of escapees as well. Images show traces that their flight or attempts to flee left behind: a wristwatch, ladders, a crack in the wall, a shoe caught in the barbed wire.

The border guards photographed and recorded everything, including the dead. One of the stories that especially shook Annett Gröschner was that of a warehouse worker from West Berlin who jumped into a canal to cool himself off while he was drunk. As he swam back, the guards thought he was an escapee and shot him.

Fifty years ago, the leader of communist East Germany said, "No one has the intention of building a wall" to separate East from West. Two months later, construction started on the Berlin Wall. (15.06.2011)

Anniversary of the Berlin Wall

DW's multimedia feature looks back at the building of the Berlin Wall.