A new database of right-wing extremists is intended to give authorities central access to information. They hope to avoid another NSU debacle, in which terrorists evaded capture for over a decade. 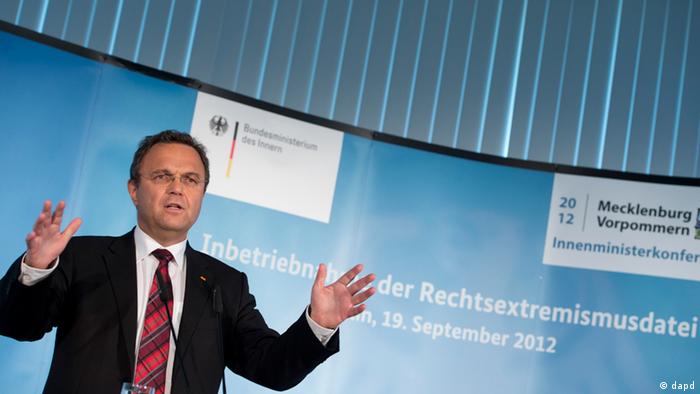 German Interior Minister Hans-Peter Friedrich, of the conservative Bavarian Christian Social Union (CSU), has prevailed. When he called for a neo-Nazi database at the beginning of the year, in the wake of the killings by the National Socialist Underground (NSU), Justice Minister Sabine Leutheusser-Schnarrenberger, from the pro-market Free Democratic Party (FDP) expressed concern. But now that Friedrich's cabinet colleague has relented, and withdrawn her opposition to it, the last obstacle to the database has been cleared.

On Wednesday (19.09.2012), the right-wing extremism database was officially launched at the Berlin branch of the Federal Criminal Police (BKA). It contains data exclusively for the purpose of combating right-wing extremism-related violence. This new tool is intended to improve communication between the security agencies on the federal and state levels.

No one disputes that the security agencies failed in connection with the NSU, which murdered nine immigrants and a policewoman between 2000 and 2006, and was linked to a bombing and a series of bank robberies, but which was only uncovered in 2011. However, Interior Minister Friedrich has warned against making what he described as objectionable and hasty accusations. Whether the failures were the result of personal failure or structural weaknesses is still unclear.

Regardless of the answer to this question, the new database is intended to improve the situation. Frederick has no doubt that it will succeed. Yet the idea behind it is not really new. Since 2001, there have been several shared databases to collect information about the perpetrators of left- and right-wing violence as well as crimes committed by foreign gangs. The existing database covering violent right-wing crime was created and used exclusively by police. 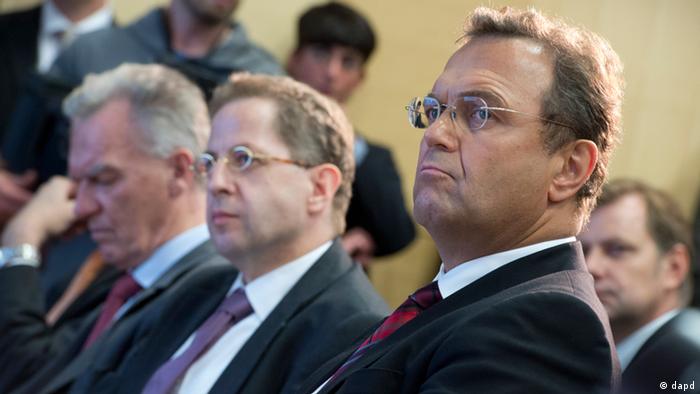 Pulling together at last: German Interior Minister Hans-Peter Friedrich (r), President of the Office for the Protection of the Constitution Hans-Georg Maassen (m), Director of the Federal Criminal Police Agency Jörg Ziercke (l)

The President of the Office for the Protection of the Constitution (BfV), Germany's internal security agency, Hans-Georg Maassen, described the new database as "absolutely necessary" to ensure a "comprehensive exchange of information" between the 36 participating agencies. Participating agencies of the federal government include the Federal Criminal Police Agency (BKA), the BfV, Military Counterintelligence Service (MAD) and the Federal Police. The internal security agencies and criminal police of Germany's 16 states will also have access to the database, which is maintained by the BKA in Wiesbaden.

According to Friedrich, it will be now possible to obtain information about people with ties to right-wing extremist violence "at the click of a mouse." It will be visible in an instant as to which authorities have been informed about a given issue, he said. Furthermore, it will allow information about individuals to be linked to their location. With this type of analysis, Friedrich hopes right-wing structures and networks can be detected faster.

Only people who have undergone a security check are to be granted access to the database. Furthermore, they can only search it using specially programmed computers. Basic data like name, address and date of birth is instantly retrievable. Details of membership in extremist groups are also available in an instant. The situation is different with bank and telecommunications connections. Investigators must request this information from the authorities who have the appropriate records.

The President of the BKA, Jörg Ziercke, is glad that now everyone from the right-wing extremist movement can be researched. However, simply holding extremist opinions or being a member of the far-right but legal National Democratic Party (NPD) is not a reason for someone to be included in the database. Friedrich says that the commonly repeated criticism that the database was a "snooping file" is absurd.

No fear of constitutional challenges

A possible appeal to the Federal Constitutional Court is something that does not worry Friedrich. And it could happen. In early November, the court will hear a lawsuit against the anti-terror database that has been in use since 2007. This database is a key tool in the fight against international terrorism. Friedrich held it up as a model when presenting the right-wing extremism database.

There was a mixed reception to the new database. The FDP's parliamentary spokesperson for domestic politics, Gisela Piltz, described it as "clearly necessary": "Despite existing legal opportunities for collaboration, not all the security agencies had pulled together" she said.

The chairwoman of the Left party in the parliamentary NSU committee, Petra Pau, said the database sounds better than it actually is. Saying the BfV "likes to fish in cloudy waters and to avoid light," she alluded to a recent revelation that a Berlin BfV agent is said to have given the security agencies information back in 2002 on the possible whereabouts of the NSU terror trio.

The Police Union (GdP) responded positively to the new investigative powers, but still regards the database as insufficient. GdP chairman Bernhard Witthaut told German public television he would have preferred that the database had a structure like that used at the Joint Counterterrorism Center. There, all the authorities sat at a common table and could "quickly detect interrelationships," he said. While he agreed the new structures in the fight against right-wing extremism would provide the authorities with more and faster information, "on the whole, I would doubt that they will help us."