New museum to show ′how Berlin is connected to the world′ | Culture| Arts, music and lifestyle reporting from Germany | DW | 20.07.2016

New museum to show 'how Berlin is connected to the world'

Berlin is renowned as one of the most vibrant metropolises of the world. The city's future new museum, the Humboldt Forum, will pay tribute to its international influences. DW met the exhibition's curator, Paul Spies. 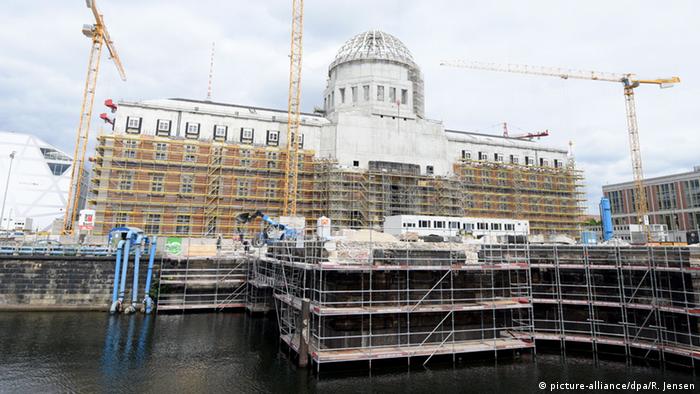 In 2019, the Humboldt Forum is set to open in the center of Berlin. This major new museum will show artworks from all over the world on the two upper floors.

The inaugural artistic director, Neil MacGregor, is working on a general concept to be presented to the public at the beginning of November. The exhibition space on the ground floor will be managed by the city of Berlin.

A new concept has been developed for this part of the museum. The exhibition, called "Berlin and the world," will feature the German capital as a vibrant metropolis in a globalized world.

DW met chief curator Paul Spies, in charge of planning the exhibition, after he presented some of his ideas during a press conference in Berlin.

DW: You have presented the main aspects of the Berlin exhibition in the future Humboldt Forum museum. It includes different topics such as war, borders, revolution, as well as fashion, free spaces, world philosophy and leisure. Is there a more precise focus behind your concept?

Paul Spies: The focus is on Berlin's international networks. Through these different topics, we will show how the city is connected to the world. The exhibition is about how the world has influenced Berlin, and how Berlin has influenced the world.

These influences weren't all positive, admittedly. Berlin initiated different wars, for example. Its artistic influence was far more positive, through theater, dance, music, and in some aspects sports. People will be invited to dance in one of the rooms of the museum.

Our starting point is that a huge city like Berlin is permanently exposed to all kinds of influences from the world of science, from migration, or earlier through colonialism. As people from all countries continue to arrive here, the city is permanently influenced by innovations from abroad.

Can you illustrate that with a concrete example? You mentioned migration. That topic has already been explored a lot in Berlin, including by museums. What is your particular approach here?

We will offer something different - of course. For example, we could explore the untold story of how the Great Elector [Frederick William, who ruled from 1640 to 1688, Eds.] very pragmatically opened his city to people from all over the world so that new districts could grow. He did that because he had a beautiful residence, but not enough inhabitants in the surrounding city. He didn't do it out of tolerance, but rather necessity; he needed the population to grow. That's why he declared that people of all religions were welcome. Pragmatism explains why he was so open, and that led Berlin to evolve into a metropolis that continues to receive new influences from the outside world. That's our thesis.

Considering the different topics you want to cover, the 4,000 square meters of exhibition space available to you appear a bit limited. Where will you have to restrict yourself in your objectives?

The exhibition offers different levels of perception. We start out by presenting the various topics in a light way, with the help of multimedia. And then there is an additional level enabling the visitors to participate by adding their own experiences. By the time people have gone through that, they have already spent at least one hour or more in the exhibition.

Well, 4,000 square meters are quite a lot. Besides, we are only a part of the entire Humboldt Forum. That's why we won't need to entertain people for four hours. People are welcome to move on to our colleagues on the upper floors. In this regard, I am very cooperative.

A lot of attention has already been given to these two upper floors, where Neil MacGregor, one of the founding directors of the Humboldt Forum, will present the world's art. Are you worried that this could shift the focus away from you and that you will receive too little attention?

No, not at all. Berlin in itself - and not these ethnological objects - is the reason why tourists are flocking here. I am more worried about that we could overshadow the other parts of the museum with our Berlin show. We need to be careful not to monopolize the museum. Imagine people coming to Humboldt Forum and see our exhibition "Berlin and the World." Many visitors are likely to decide to visit it. Just one floor above, there is a huge exhibition of ethnological art. We want to be cooperative and tell visitors that our exhibition is just the beginning. It should motivate people to look further as well.

Since February 2016, the Dutch museum and exhibition expert Paul Spies has been the director of the Foundation Stadtmuseum in Berlin, as well as chief curator of the Berlin exhibition in the future Humboldt Forum museum. He previously directed the Amsterdam Museum, which he successfully modernized.

Berlin's Torstrasse has evolved into one of the trendiest places in the capital. Art, fashion, food - it has it all. The once dreary street in the former East has turned into a hotspot of the capital. (24.06.2016)