New Italian prime minister sworn in with government of technocrats | Europe| News and current affairs from around the continent | DW | 16.11.2011

New Italian prime minister sworn in with government of technocrats

Italy's new prime minister has formed a government to push through austerity measures. Economics professor Mario Monti filled his cabinet with technocrats instead of politicians. 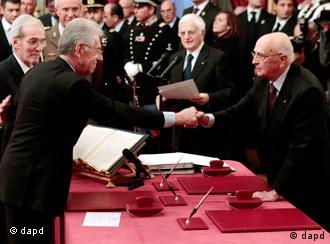 Monti may find others less cooperative than the president

Mario Monti has been sworn in as the new prime minister of Italy. President Giorgio Napolitano presided over the ceremony in the Qurinale Palace in Rome, which formally brought to an end the administration of Silvio Berlusconi.

Earlier, Montai announced his cabinet, intended to implement reforms aimed at pulling Italy back from the brink of an economic disaster.

The 68-year-old former European competition commissioner, who is to serve both as premier and economics minister for the time being, described the task ahead of his government as "a race."

Despite the resignation of former Prime Minister Silvio Berlusconi on Saturday, international markets remain unconvinced of Italy's chances of overcoming its debt crisis, which has driven its borrowing costs to what is seen as an unsustainable level - with yields on 10-year bonds hovering around seven percent. The crisis in Italy is seen as a threat well beyond Italy's borders, as it is the third-largest economy in the 17-member eurozone.

Monti, though, appeared confident that he and his cabinet ministers would be successful in turning the country's economy around.

"We have had many signals of encouragement from our European partners and the international community. I believe all this will translate into ... a calming of the market difficulties concerning our country," Monti told reporters as he presented his cabinet at the presidential palace in Rome.

His cabinet is to be made up of technocrats instead of career politicians. Apart from his own economics ministry, one of the key appointments is seen as the infrastructure and industry portfolio, which he has handed to Corrado Passera, the CEO of Italy's largest bank, Intesa Sanpaolo.

Monti said he had chosen to keep politicians out of the cabinet in an effort to avoid political infighting as he seeks to push through reforms, which he referred to as "sacrifices."

"The absence of political personalities in the government will help rather than hinder a solid base of support for the government in parliament and in the political parties because it will remove one ground for disagreement," he said.

Monti is expected to outline his planned economic measures ahead of a confidence vote in the upper house of parliament on Thursday. The lower house is expected to hold its vote on Friday.