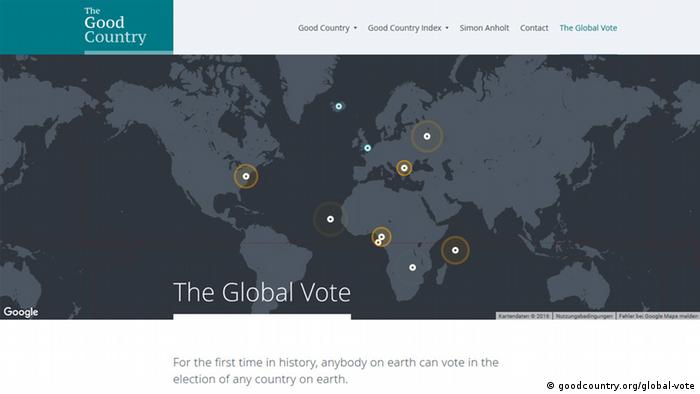 You may worry about the Brexit or the next US president, but if you aren't a citizen of the UK or the US, you can't do much about it. A new project addresses this gap and helps the global public express its will.

The Global Vote online platform allows users to register and select leaders in elections anywhere around the globe, regardless of their nationality. The new platform serves as a tool to remind "each candidate in each national election that we're here, we care, and we're watching," says Simon Anholt, its founder.

The idea behind The Global Vote has been brewing for a very long time, Anholt tells DW. The international policy consultant has advised prime ministers and presidents of over 50 countries on connecting and working with other nations. In his experience, however, many of these leaders are more interested in competition rather than cooperation. "That's the reflection of the policies and mindsets, and of the training of those leaders. They believe that when they come to power, their responsibility is to their own citizens, their own businesses and their own little slice of territory, and this is disastrous, because nobody looks after the whole system." Anholt notes.

Yet what is needed, he explains in a press statement, is quite otherwise: "To make the world work, we need a world of good leaders: leaders who consider the need of every man, woman, child and animal on the planet." For this reason, Anholt saw an opportunity to create a platform that encourages the engagement of people around the world in individual countries' elections and referenda, and The Global Vote was born.

The website lists a variety of elections and plebiscites worldwide in which a user can participate. These include the US Presidential Elections on November 8, parliamentary elections in Russia in September and elections in Zambia, among several others.

"You go on the site, you pick the election or the referendum that you're interested in, you register, you cast your vote." Anholt explains. 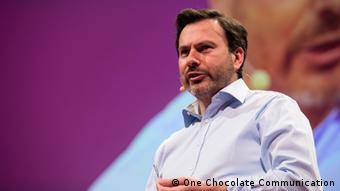 The UK EU referendum on June 23 is currently garnering a lot of interest on the website. "The reason we're offering the Brexit referendum is because the people who are going to be affected by Britain leaving the EU or staying in the EU are not just British. It's going to affect people in Germany; it's going to affect people in Europe and all over the world. And yet, only British people can vote. This seems to me to be faulty democracy," Anholt tells DW.

The results of the vote will be released shortly before the actual referendum on the British EU exit takes place on June 23. "Basically, the media will be covering two results. They'll be covering The Global Vote, and they'll be covering the local vote, and people can compare the two and draw whatever conclusions they want," Anholt says.

The Global Vote's influence, according to the adviser, comes through public opinion, through the media and social networks. Despite having no real power to elect leaders, the campaign can make a difference because it expresses the will of the global public.

"My feeling is that there's a kind of magic tipping point, where in any given election, if we have just one more person outside the country than there are people inside the country, then the world has changed," Anholt argues.

He uses the example of the elections in Iceland on June 24 to illustrate how The Global Vote can make an impact. If a sizeable number of people participate in the internet poll and The Global Vote's results are the same as those in the Icelandic elections, it won't make a difference. But if the results are different, then it's obvious that globally, citizens want something different from what's happened and a debate is needed, Anholt argues.

The Global Vote has launched only recently and it's difficult to assess results right now. "But my hope is that by the time we cover the US presidential elections in November, we'll have more people around the world voting on Donald vs. Hillary than there are registered voters in the USA," the website's founder concludes.