Armenian photographer Kegham Djeghalian captured life in Gaza, between Israel and Egypt, from the 1940s to the 1970s. A DW documentary retraces his work.

At his home in Gaza City, Marwan Tarazi keeps a little treasure wrapped in plastic bags and stored in boxes: photos and negatives from the 1940s to the 1970s. They portray a part of life in the Gaza Stripduring that period and are part of the legacy of Armenian photographer Kegham Djeghalian, who opened one of the first photo studios in Gaza City in the 1940s. "These negatives and prints are very important to me. They are our heritage, our culture. What you see in the picture is what lives on," says Tarazi, who aims to preserve the collection.

The black-and-white photos show a little-known side of Gaza, which has been ruled for over a decade by the Islamist group Hamas and has been tightly closed off by Israel and partly by Egypt as well.

Some photos show the train station along the Gaza-Egypt railroad which has been long destroyed. Others are artistically lit studio portraits from the pre-selfie era, when a visit to a photographer was something special.

Kegham's lens also captured political events: The Palestinian refugee crisis after the creation of the State of Israel in 1948 and the Egyptian rule in Gaza until 1967. "After the war in 1948, many Palestinian refugees fled to Gaza. His family knew a similar situation in Armenia," says Marwan Tarazi, adding that Kegham thought of Gaza as his "second homeland" and started to take pictures of everything around him. 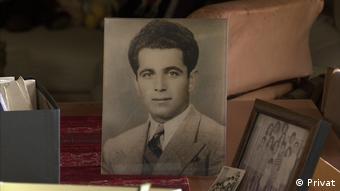 Djeghalian's mother had to flee with him as a toddler when the Armenian Genocide took place after 1915. First, they were displaced to Syria. Later, when his mother died, he was sent as a teenager to stay with relatives in Jerusalem, which was under the British Mandate at that time.

Then in the early 1940s, Kegham Djeghalian went to Gaza and started to work as photographer. "I don't know why my father went to Gaza at that time," says his daughter Anahid Boutin, who was born in Gaza and lives in France today. "Maybe my father thought this is the best place to find work," she adds, as many Armenians went to the Middle East looking for work at the time.

Several prominent Armenian photographers became known for documenting events in Jerusalem and other places during the early part of 20th century.

In Gaza, only a few photographers were around but there is not much documentation about them. Later, in the 1960s, a whole generation of young Palestinian photographers learned the trade. Among them Marwan's brother, Morris Tarazi, who started to work at Kegham's studio.

Decades later, the Tarazis took over the studio after Kegham passed away, and "Photo Kegham" became "Photo Morris."

Visual memory of the past

Many of the traditional photo studios — among them Photo Morris — have long gone.

More recently, generations of photojournalists have documented Gaza's eventful history — from the first Intifada in 1987 to the three wars between Hamas and Israel in the past decade. 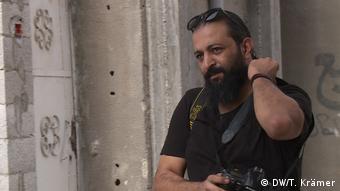 Shareef Sarhan takes pictures of the ongoing conflict and also documents daily life in the closed-off territory. "I try to convey that Gaza is multi-faceted. What we know, or what people are used to, is Gaza's image in media which talks about war, destruction, the blockade and the occupation. But at the same time there is also hope, love and work in Gaza's streets and homes, and a different life," he says.

Sarhan is currently working on a book about traditional professions that are slowly disappearing in Gaza; like Kegham who featured such trades in his portraits. For Sarhan, photography is the visual memory of a society. But nostalgia for the past is not part of it. "Some people are not interested at all in old pictures, and that's understandable given the situation in Gaza. But, others like me search for old pictures, I want to know how my parents and my grandparents lived years ago," says Sarhan.

Parts of Gaza's visual history is preserved in the photo archive of the United Nations Relief and Works Agency, UNRWA, in Gaza City. The photo archive has been digitized over the past years. It mainly shows the lives of Palestinian refugees since they were displaced in 1948 as captured by UN photographers. Kegham's younger brother, Hrant, used to work as one of the UN photographers. In Ramallah in the occupied West Bank, some cultural institutions collect photos from family albums of the past decades to create a photo archive.

As for Kegham’s archive, Marwan Tarazi has digitalized and cataloged most of the prints on his own, using his phone and other simple tools. But he recognizes how storing negatives in boxes and plastic bags is far from ideal. Many of the negatives have not been developed yet and their quality only diminishes over the years. "I hope that the young generation takes interest in them and sees their value," says Tarazi.

Far away in France, Kegham's daughter hopes that the photos will be kept safe. Anahid Boutin has not been able to visit Gaza for many years because of the strict Israeli travel restrictions, but she keeps in contact with her childhood friends who are still there. She cherishes the photos for how they connect different generations in different places. "It would be good to put things together to keep the history, at least the history that we know," Boutin says. "The prints are here. I hope we could put them together to represent a part of history of Gaza, an agitated [turbulent], and a moving history."

The documentary "Collected Memories - Photographs of Gaza" by Tania Krämer airs on DW TV on August 14.

The power of arts in the Middle East crisis

War alters societies, and art can serve to gauge the change. In the war-struck Middle East, artists are hindered in their work, and some are forced to emigrate. But they still believe in the healing capacity of art.