China’s new leaders have promised to fight corruption and streamline government, while supporting stable relations with the US. The remarks came as the National People’s Congress closed after choosing a new government. 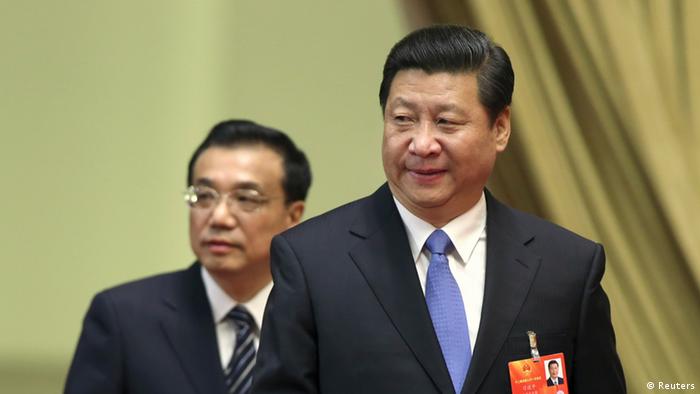 Chinese President Xi Jinping (pictured above, foreground) pledged on Sunday to work for a "great renaissance of the Chinese nation," in his first speech since taking over the reigns of the world's most populous nation and second largest economy.

In comments made to the 3,000 delegates of the National People's Congress, Xi also called for "arduous efforts" to realize "the Chinese dream."

The president promised reform, saying that his government would "resolutely reject formalism, bureaucratism, hedonism and extravagance, and resolutely fight against corruption and other misconduct in all manifestations."

Like the president, the prime minister also promised to implement difficult economic and governmental reforms.

"Sometimes stirring vested interests may be more difficult than stirring the soul, but however deep the water may be, we will wade into the water," Li said. "This is because we have no alternative. Reform concerns the destiny of our country and the future of our nation."

“I think we should not make groundless accusations against each other, and spend more time doing practical things that will contribute to cyber-security,” he said.

The prime minister also discussed the "importance" of Beijing's relationship with Washington, saying that "conflicts between big powers are not inevitable."

"Like in the past, the new government in China attaches great importance to ties with the US," Li said.