New Caledonians have voted against a proposal to gain independence, marking a milestone moment in a decades-long decolonization effort. The South Pacific territory has been a French colony for nearly 170 years. 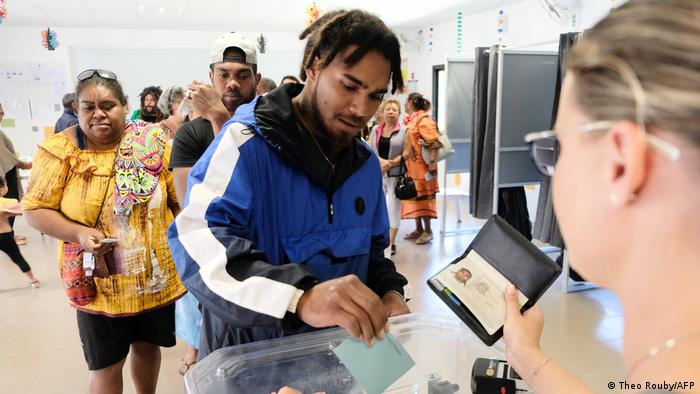 Voters in the South Pacific territory of New Caledonia narrowly rejected independence in a referendum on Sunday, a provisional final count showed.

The archipelago's high commission said 53.26% voted "no" to breaking away from France, with around 70% of the ballots counted.

More than 85% of the 180,000 people registered to vote were asked to answer the question: "Do you want New Caledonia to gain full sovereignty and become independent?''

Sunday's referendum was part of the Noumea Accord, a decolonization plan set in motion in 1998 to end a deadly conflict between descendants of European settlers and the mostly pro-independence indigenous Kanak population, who continue to face widespread discrimination.

French President Emmanuel Macron, who had said previously that "France would be less beautiful without New Caledonia," welcomed the result of the referendum.

"Voters have had their say. They confirmed their wish to keep New Caledonia a part of France. As head of state, I salute this show of confidence in the Republic with a profound feeling of gratitude," Macron said in a televised statement from the Elysee palace.

The French leader promised pro-independence supporters "this is with you, all together, that we will build New Caledonia tomorrow.'' He commended the "success'" of the vote and called on New Caledonia residents to "look to the future."

If the "no" vote is confirmed, it would be the second failed pro-independence bid in as many years. However, the partial results suggest support for full sovereignty was growing — opposition to independence was slightly higher at 56.7% in a referendum in 2018.

A third vote can be held in two years' time, in 2022, if the move is requested by at least a third of the local legislature.

New Caledonia, which lies between Australia and Fiji, became a French colony in 1853 under Napoleon's nephew, Emperor Napoleon III. It was used as a prison for decades, before becoming an overseas territory after World War II. French citizenship was granted to all Kanaks in 1957.

While the territory enjoys a certain degree of autonomy from Paris, it depends heavily on the €1.3 billion ($1.5 billion) that the French state contributes every year.

The results bring relief to Macron's government, which has been struggling to cope with the coronavirus pandemic in the run-up to the referendum.

Rescuers are searching for people reported missing in deadly floods which hit border regions of northern Italy and southern France. Six German trekkers remain unaccounted for, and many homes have been destroyed.