Mired in a relegation battle, fourth-tier SV Babelsberg turned to former striker Daniel Frahn in their hour of need. But the signing has split fans of the left-wing minded club due to Frahn’s link to far-right extremism. As Daniel Frahn entered the pitch as a substitute at the Karl-Liebknecht-Stadion on Sunday, the atmosphere in SV Babelsberg's home ground was a strange mixture of support, caution, and disapproval.

While sections of the home base applauded a returning local idol, signed on deadline day on Friday, others fell silent for the arrival of a player many now consider a fallen hero.

Born in Potsdam, the 32-year-old scored 45 goals for his hometown club between 2007 and 2010, cementing himself in the history books. But last year he was released from Chemnitzer FC following a number of high-profile incidents involving right-wing hooligans.

Given the Babelsberg fanbase prides itself on campaigning against racism and fascism, Frahn's signing has proved a polarizing dilemma.

"The fans are divided in their opinions," Babelsberg fan Michael* told DW. "Many see it as a blatant loss of image or a betrayal of their own ideals. Others only see the sporting benefits. The mood [in the stadium] was not like other games."

Frahn's fall from grace began in March last year, when he held up a t-shirt which read "Support your local hools!" after scoring a goal for Chemnitzer. It was a message of condolence for Thomas Haller, right-wing founder of the hooligan group HooNaRa ("Hooligans, Nazis, Racists"), who had died.

Frahn was fined and suspended for four matches by the competition's governing body. Daniel Frahn held up a t-shirt in commemoration of a right-wing hooligan.

Then in August, an injured Frahn joined Chemnitzer ultras in the stands, including notorious right-wing groups Kaotic Chemnitz and NS Boys, for an away match against Hallescher FC. His club was not willing to hand out a third chance and canceled his contract for "massive club-damaging behaviour".

An impasse followed as Frahn took the matter to a labor tribunal and Frahn and Chemnitzer finally parted ways mutually on January 28. It paved the way for Babelsberg to sign a striker who can boost their hopes of escaping relegation from the Regionalliga Nordost.

On Sunday, Babelsberg welcomed their new signing with a 1-0 win over BSG Chemie Leipzig. But the fans spent most of the 90 minutes and beyond discussing one man.

"The win over Chemie didn't really feel like a win because somehow most of the feelings and thoughts were taken up by the Frahn signing," Michael said.

"It was not the usual exuberant mood that comes with victory."

To make it more uncomfortable , Chemie, a similarly left-leaning club, took advantage of heaping misery on the home support.

As Frahn's name was announced pre-match, the chant "Nazis out" went up among Chemie fans. Some of the Babelsberg faithful even joined in.

A number of banners were also unfurled, the most scathing reading: "Daniel Frahn - Heim ins Reich" in reference to Hitler's foreign policy of bringing ethnic Germans back under the banner of a German empire during World War II. 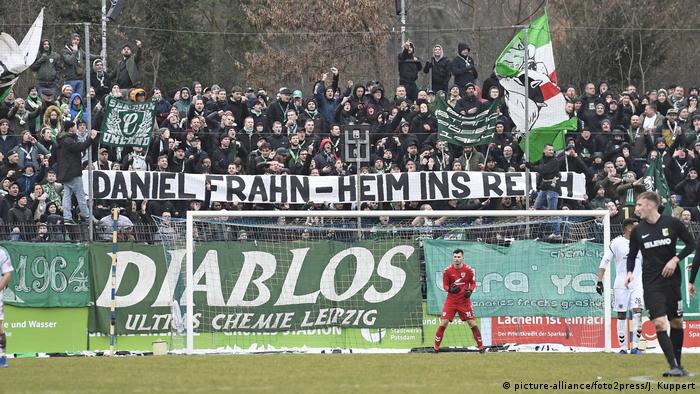 After the game's final whistle, Frahn appeared relieved when facing the press.

"There was a lot of anticipation, but also tension because I didn't know exactly what to expect," he said.

"I know there are many critics - and rightly so. I just hope they give me the chance to prove who Daniel Frahn really is. And that's not how it's portrayed in the newspapers."

The critics remain skeptical, while others believe the player deserves an opportunity to redeem himself at his local club.

"Of course, everyone deserves a second chance in opinion," Michael said.

"But clearly you should make a clear stand against facism, racism and any other kind of discrimination.

"I still don't know what to think of it. Frahn is of course a sporting asset for us and can be very useful in the relegation battle. But is it worth it?" 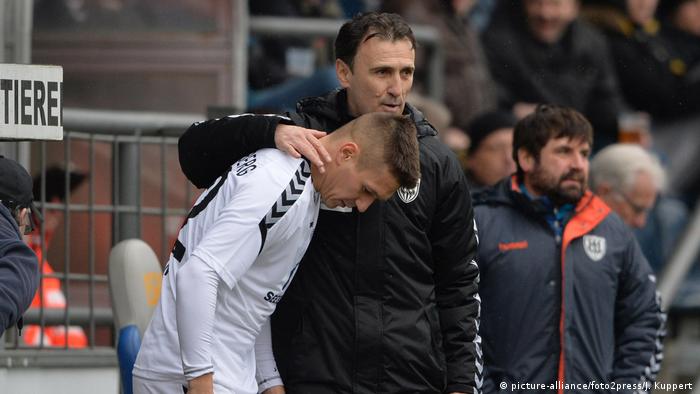 Daniel Frahn getting ready to make his second debut for Babelsberg.

Frahn has scored more than 200 goals throughout his career and led RB Leipzig into the second division as captain. The transfer is something of a coup for Babelsberg, who lie in 16th and have only scored 17 goals in 19 games.

Club president Archibald Horlitz defended the decision after the victory over Chemie.

"It suits Babelsberg to go this way... I'm very happy about the team's performance," he said.

"[Frahn] has admitted that it was 'the biggest mistake of my life'. I'm convinced he will take this chance and I'm crossing my fingers." 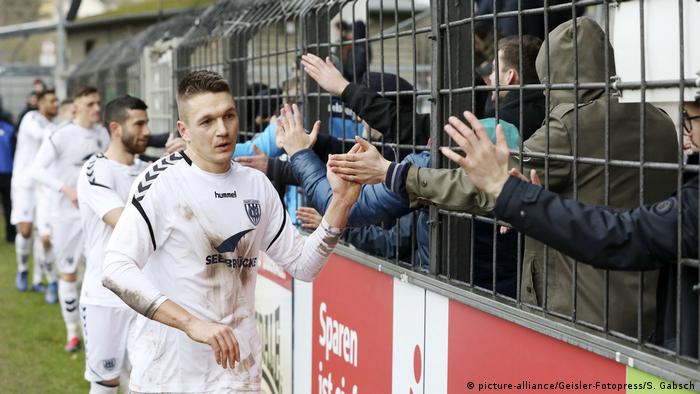 Frahn will have to cross more than his fingers if he is to win over the skeptics. Failing to explain his version of events in public has not helped, but he has won over teammates and officials at Babelsberg.

For Michael, it's an unwanted scandal, one which could easily have been avoided.

"There is already the possibility that there will be a loss of image and that the credibility of the club will be lost. Babelsberg have brought a problem into the house which shouldn't really exist."

Frahn may indeed save Babelsberg from relegation this season, but his presence could do more harm than good to a football club that prides itself on unity and harmony.

*Michael is a false name to protect the fans' identity.