New academic study finds life expectancy on the rise | World | Breaking news and perspectives from around the globe | DW | 22.02.2017

The life expectancy of people in developed countries keeps going up, according to research by London scientists. In some places it could soon be more than 90 - and the gap between men and women is decreasing, too. 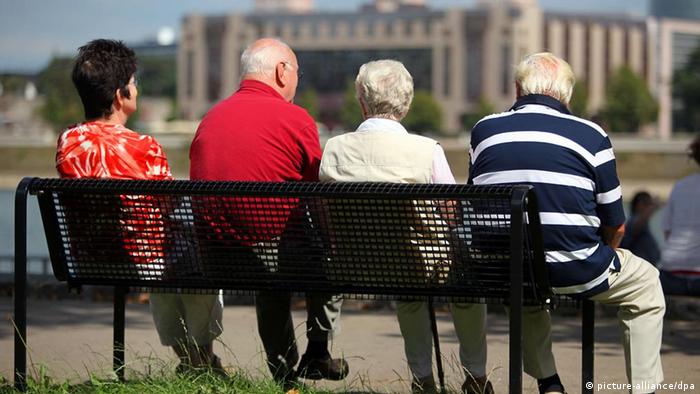 People keep living longer, but researchers had always doubted that life expectancy would ever extend beyond 90. Yet scientists from Imperial College in London have now confirmed exactly that.

A research group at the university analyzed data from 35 industrial countries, then published its findings in the professional journal "The Lancet." The study also shows that the gap between men and women in terms of life expectancy is set to narrow by the year 2030. This was calculated on the basis of a statistical model, and using birth and death data from the World Health Organization (WHO). According to this, there is at least an 85 percent likelihood that life expectancy for men in all these countries will rise; the likelihood for women is 65 percent.

There are, however, regional differences. When it comes to living past the age of 90, women in South Korea are 57 percent likely to do so. Vasilis Kontis from the Imperial College research group told DW that this was because of improvements in the prevention and treatment of chronic diseases. He explained that, compared to people in other countries, in South Korea fewer are overweight, and there are fewer smokers. Kontis says life expectancy in South Korea will probably continue to rise because of the country's improved economic situation. According to the study, women from France, Spain and Japan live almost as long as South Korean women. In Germany, too, people keep living longer: The current life expectancy of men is around 78, but according to the study this will rise to almost 82 by the year 2030, by which time German women can expect to live to almost 86 - three years longer than at present.

These figures also show that the difference in life expectancy between women and men is shrinking. The study says the fact that women in these countries live longer than men is also partly because it is more common for men there to suffer fatal injuries, and they are more likely to smoke, which increases their risk of developing conditions like lung cancer and cardiovascular disease. The Lancet quotes the study leader Professor Majid Ezzati as saying: "Our prognoses of longer life expectancy are proof of the successes in healthcare." He added that it was important for politics to support the increasingly aging population.

What does the data tell us?

The data and statistics regularly published about people's life expectancy are just hypothetical. Life expectancy is the average length of time that an organism lives from a specified point (in scientific studies, this is usually birth) until its death. This period is ascertained using a mortality table, based on the observed dying frequency in the past and model assumptions for future developments.

This means that the calculated values - like a life expectancy of more than 90 years - are theoretical. They're prognoses, not fixed values. Each prognosis is based on conditions at the time of calculation, i.e. the current state of medicine, research, security and environmental influences. This is why such a prognosis has little to do with how long people do in fact live. Furthermore, average life expectancy is just that - an average. If it is set at 90, it could still be that nobody actually reaches this age, but that people die either older or younger. What is certain, however, is that average life expectancy overall is increasing. According to the Federal Office of Statistics, people today are living about twice as long as they did just 100 years ago.

The speed at which we age is based on a number of different factors. Scientists assume that, in particular, better medical care, more widespread access to clean water, better nutrition and the decline of fatal diseases play a large role. And for those who are spared war, natural disaster, famine and epidemics, other factors such as stress, poverty, a healthy lifestyle and exercise are decisive.

In some countries, life expectancy actually falls rather than rises - in Syria, for example, where, statistically speaking, it has gone down by 20 years since the outbreak of war.

Until now, the biological reasons for aging not been fully researched, although scientists are investigating many different possibilities. Genes and external influences determine whether or not a person reaches an old age, just like the aging process of cells in the body, which differs in different people. Cellular aging is also a starting point for research into immortality.

Can Japan stub out its smoking habit?

With the clock ticking down to 2020 and the opening of the Tokyo Olympic Games, Japan is under pressure to comply with the IOC stipulation that all public spaces in the host city are smoking-free. Julian Ryall reports. (07.02.2017)

Lemmy, Bowie, Rickman, and Frey. Four men - musicians and actors - dead in the space of a few weeks. Three died of cancer, and all were a similar age, but relatively young. Men, it's time we got tested. (19.01.2016)

A joint OECD/European Commission report says chronic diseases and premature deaths cost the EU billions every year. It calls for better prevention policies and improved health care. So what else is new? (23.11.2016)