Lemmy, Bowie, Rickman, and Frey. Four men - musicians and actors - dead in the space of a few weeks. Three died of cancer, and all were a similar age, but relatively young. Men, it's time we got tested. 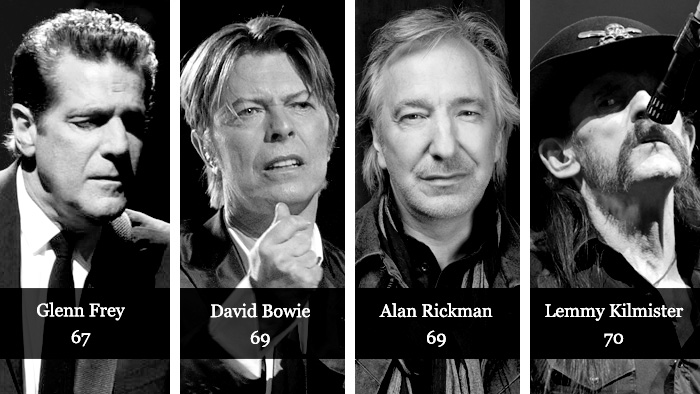 Four men. All around the same age. Musicians and actors, celebrities. Dead. Is there a lesson in this story for the rest of us?

It started with Lemmy Kilmister.

When Lemmy died in late December, just days after learning he had an "aggressive" form of cancer - tumors in the brain and neck - it didn't come as the biggest surprise to hear he was gone. Sad as it was.

The Motörhead front man had had a 50 year history of living in the rock 'n' roll fastlane. An almost constant flow of whisky fuelled his day, and then there were the amphetamines.

Lemmy also suffered from hypertension and was known to take medication for diabetes. He had just turned 70.

Then about a week later David Bowie died after an 18 month battle with liver cancer. Bowie had also had a history of drug and alcohol addiction, but was long sober. He had just turned 69.

And, now, Glenn Frey. A statement released by his family and band, The Eagles, says he died due to "complications from rheumatoid arthritis, acute ulcerative colitis and pneumonia." He was aged 67.

Of a similar age

Is it just because they were famous men, who had lived a colorful life on the edge - that is, the musicians among them? (Rickman, it seems, was the quintessential English actor, trained at the Royal Academy of Dramatic Art and a member of the Royal Shakespeare Company, with little time for rockstar debauchery on LA's Sunset Strip.)

Had the drugs and alcohol caused cancer for Lemmy and Bowie? These figures from the World Health Organization indicate they each had at least another five years in them.

So perhaps there is a lesson in this for all of us.

Don't let the Reaper take you by surprise

If you're lucky, how you go should be up to you. You may want to simply fall off the edge of the planet. Others may prefer a little warning.

The most shocking thing about Lemmy's death is that he had only just learned of his diagnosis - and only days later the lights went out.

But if you're the sort of person who likes to plan things in life, go for regular medical check ups.

The US National Institutes of Health is just one government body offering information on when adult men should go for screening, and what we should screen for.

For example, you should consider the following checks:

This list is far from comprehensive. And the advice will vary from country to country, and region to region, depending on a range of factors.

So your best bet is ... make an appointment today.

Glenn Frey, founder and guitarist of US rock band 'The Eagles,' dies at 67

The founding member of The Eagles, Glenn Frey, has passed away in New York after battling multiple illnesses, his bandmates said. Frey was a world-renowned songwriter. (18.01.2016)

Popular theater and film actor Alan Rickman has died of cancer in London. Rickman was known for his landmark roles as Professor Snape in the Harry Potter movies and as Bruce Willis' adversary in "Die Hard." (14.01.2016)

David Bowie is lauded for his ever-changing music, style and innovative approach to art. But it's often forgotten that he was also one of the first artists to recognize the potential of the Internet. (11.01.2016)