Just as Israel and Turkey's relationship is souring, Greece and the Jewish state are making moves to build closer ties. Netanyahu's state visit to Athens is the first by an Israeli prime minister. 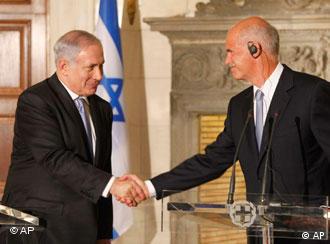 Israeli Prime Minister Benjamin Netanyahu launched Monday a two-day trip to Greece, signaling a warming of relations between the two countries, at the same times as ties deteriorate between Israel and Greece's traditional rival, Turkey.

Netanyahu's visit to Greece, the first by an Israeli head of state, was preceded by Greek Prime Minister George Papandreou's groundbreaking Israel visit three weeks ago.

While Israeli media have touted the visit as a sign of rapprochement, there are speculations that Israel may be strategically courting Greece in order to replace its strained ties with Turkey.

Deutsche Welle Radio's Athens correspondent, Jannis Papadimitriou said that, before Greece, Israel had "already started warming its ties with other traditional rivals in southeastern Europe - for example, with Bulgaria and Cyprus."

Papadimitriou added that, "in the last months after Turkey closed its skies to Israeli military aircraft, everything happened very quickly" between Israel and Greece, which did not recognize Israel's statehood until the early 1990s. 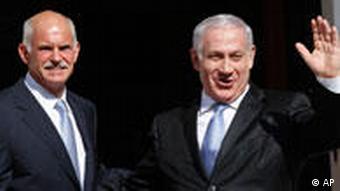 No Israeli head of state has visited Greece before

Both Israel and Greece have distanced themselves from speculations that they are forming an alliance against Turkey. An official travelling with Netanyahu quoted the leader as saying that both Israel and Greece wanted to improve ties with Turkey, and that, "certainly this [visit] doesn't harm that [goal]. It can only help."

Jannis Papadimitriou sees Greece as walking a diplomatic tightrope. "Greece wants to avoid the impression that it's improving relations with Israel just as a counterbalance to Turkey," he said.

Greece to become the new Turkey?

Turkey, the only largely Muslim NATO state, had long played an intermediary role between Arab states and Israel, and the two countries shared close military and intelligence cooperation.

Greece, which has traditionally aligned itself with Arab nations, may be poised to assume a mediatory role between Israel and the rest of the Middle East.

"Greece is ready to help the two [Israeli and Palestinian] parties come together and solve their problems," a Greek official told Reuters. 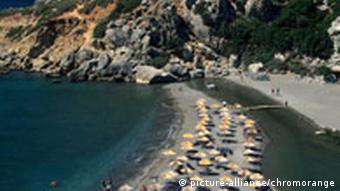 Other topics on the agenda for Netanyahu's visit are tourism, Israeli investment in Greek industry and ecological projects such as water conservation.

Israeli officials say the Jewish state may also use talks to seek closer military ties with Greece. The Israeli air force carried out military exercises in Greece in 2008 and again this year, though May's maneuvers were cut short by Athens directly after Israel's raid of aid flotillas.

There is a chance the exercises could begin again this fall, although Papadimitriou remains skeptical, pointing out that many of the 30 Greeks on the aid flotilla to Gaza claim mistreatment by Israeli forces.

"For the moment I can't imagine that Greece will open its skies for Israeli military forces unless it gets something really good in return - for example, advanced military technology from Israel," he said. 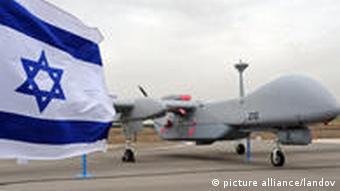 After landing in Athens, Netanyahu visited a museum dedicated to Greece's Jewish community, largely destroyed by the Holocaust.

Meanwhile, left-wing organizations in Greece called for protests against Netanyahu's visit, and a Palestinian flag was put up Sunday on the wall of the Acropolis, Athens' most famous landmark.

Israel's prime minister told an internal investigation on Monday that a deadly Israeli raid on an aid convoy bound for Gaza was within the boundaries of international law. (09.08.2010)

Hundreds of Turkish activists from the Gaza aid flotilla arrived in Istanbul after being held in Israel since Monday. A large crowd of supporters turned up at Istanbul's airport to welcome them home. (03.06.2010)

Turkey's relationship with Israel in doubt after diplomatic rows

For more than a decade, Turkey and Israel have enjoyed a strategic relationship. But now their future as allies appears to be in doubt as Turkey sparks a series of diplomatic rows. (28.10.2009)