Israeli Prime Minister Benjamin Netanyahu and his right-wing party alliance have won a narrow victory in parliamentary elections. His Likud-Beteinu grouping has won 31 seats in the 120-seat parliament. 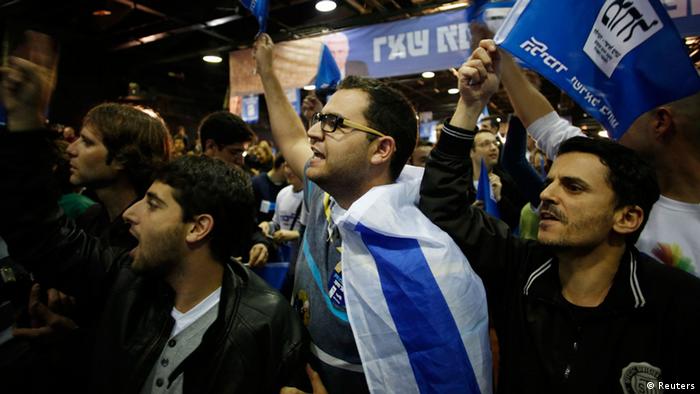 Netanyahu's right-wing faction received the most votes in Tuesday's election, but was weakened by a strong turnout for the centrist Yesh Atid, according to preliminary figures.

With 90 percent of ballots counted, Netanyahu's Likud-Beteinu appeared to have 31 seats in the Knesset - 11 fewer than the 42 they had in the previous parliament.

In a victory speech, the premier said that preventing Iran from becoming a nuclear power was to be the priority of any new government he will aim to form.

"The government we build will be based on three main principles," Netanyahu said. "First of all, military strength in the face of the big challenges we face. The first challenge was and remains preventing Iran from obtaining nuclear weapons."

The 63-year-old said the party would reach out across the political spectrum. "We need to form the broadest possible government," he said.

Israel has a choice - between the incumbent and the high flyer, between a rightward turn and an ultra-rightward turn. Polls suggest Netanyahu will win, but challenger Naftali Bennett will still shape Israeli politics. (21.01.2013)

Likud-Beitenu is an alliance of Netanyahu's Likud party and the hard-line secular but nationalist Yisrael Beitenu, with both having run on the same ticket.

The secular, centrist Yesh Atid followed with an expected 19 seats, making it the surprise package of the election proper without having created much of a stir in the campaign itself. The center-left Labor party finished with 15 seats and the far-right religious nationalist Jewish Home - which had been expected to do better - looked likely to take 11.

Once results are finalized, Netanyahu will be on course to secure a third term in office.

Despite the win, Netanyahu's party still faces the uphill battle of pulling together 61 members of parliament to form a majority coalition.

No individual Israeli party has ever won a parliamentary majority, with the president traditionally asking the leader of the biggest bloc to try to form a governing coalition.