Israel has a choice - between the incumbent and the high flyer, between a rightward turn and an ultra-rightward turn. Polls suggest Netanyahu will win, but challenger Naftali Bennett will still shape Israeli politics. 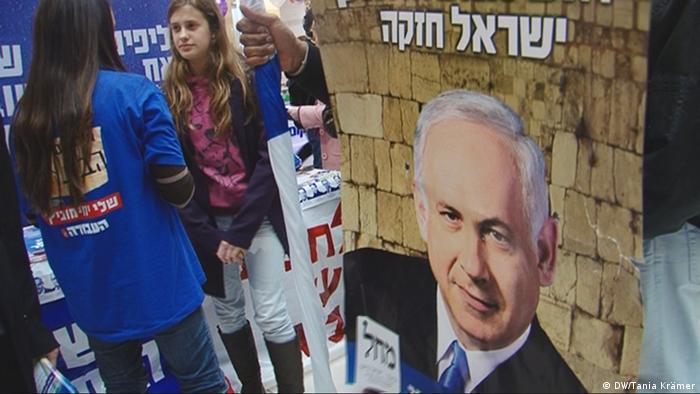 At a shopping mall in Rechovot, a small town in central Israel, campaign volunteers are still vociferously pushing their candidate. In all, there are 34 tickets vying for seats in the Knesset. Volunteer Eyal, at the stand for the right-wing Likud Beiteinu alliance, is confident. "We need a strong prime minister, and I hope Likud will get a lot of votes," the young man says, clutching his election poster featuring a portrait of incumbent premier Benjamin Netanyahu. "We have the best prime minister - we don't need to change him," an older lady adds. "Only he can give us security."

But Netanyahu, like the other candidates, is facing uncertain poll numbers. The tactical alliance between his Likud party and the right-wing nationalist Yisrael Beiteinu party of Foreign Minister Avigdor Liebermann has cost him votes. Liebermann was forced to resign following fraud allegations and is, at least until his trial, a political liability. 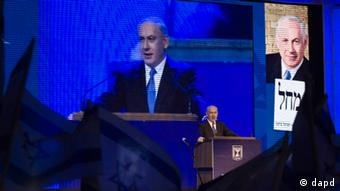 Netanyahu is losing votes to the right

Netanyahu is also bleeding votes to his right - to the rock star of this election Naftali Bennett. The 40-year-old Bennett only took over the leadership of the religious-nationalist Habayit Yehudi ("The Jewish Home") party in November, which up until now accounted for three seats in the government coalition. The ultra-right party now looks set to expand its representation to between 12 and 14 seats.

Bennett, a former high-tech businessman and commando in the elite counter-terrorism unit Sayeret Matkal, has given his party a new, modern face. A lot of young people have come to see him on the campaign trail in the small town of Rosh HaAyin. One of them is 19-year-old Yaron, a first-time voter who intends to cast his ballot for Bennett. "He is credible and has really convinced me," the young man says. "I think he can do something for Israel."

At campaign events, Bennett often speaks of a "Jewish spring" and a "return to Jewish values." "Our priority is to solve the problems in Israel. Living costs have risen by 40 percent - income is not enough to live on," he told DW. "As well as this, we have to stop talking of a 'yes or no' to Palestine." 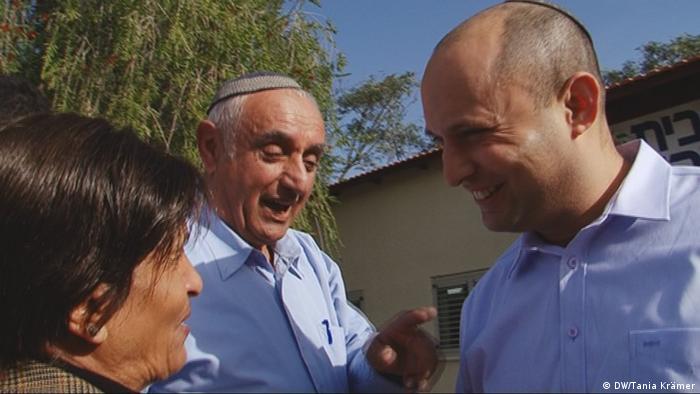 Bennett refuses to countenance a Palestinian state. "If you've banged your head against a brick wall for years, you have to re-think your plans to find a de facto peace," he says. If it were up to him, Israel would annex the so-called Area C - around 60 percent of the West Bank.

The newcomer's hard-line pronouncements have made headlines around the world, while his fast-growing popularity has caused surprise in Israel. "He is charismatic, young, and religious, and he comes across as a lot more modern than previous religious politicians," says political scientist Tamir Sheafer of the Hebrew University of Jerusalem. That, he adds, makes him a lot more attractive to the public, particularly those against a two-state solution.

But not everyone on the university campus is impressed by Bennett. "The hype around Bennett gets on my nerves," says one young female student. "But it's true - people don't see a solution anymore. They've buried the peace process, so something like this goes down well." Another student sees the current climate as predictable: "Whenever things get difficult, whether it's after a conflict like the one in Gaza, or whether it's economically or socially, we always shift to the right. It's a simple pattern, but unfortunately that's the way it is in Israel."

The mood in Israel ahead of the election is generally ambiguous. This could be because many believe that the election will not change much in the country. An opinion poll published in the Haaretz daily last Friday found that around 15 percent of voters are still undecided. Skepticism reigns on the Rothschild Boulevard in central Tel Aviv, where the so-called "summer of protest" began in 2011. "Everyone expects Netanyahu to stay prime minister anyway," says Neta, one passer-by. "But I hope that there will at least be a strong left-wing opposition, even if there isn't much of the left remaining. They call themselves the new center now." 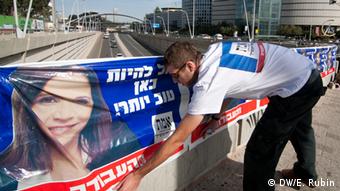 The center left Labor Party is campaigning in Tel Aviv

Graphic designer Ronny Edry took part in the social justice demonstrations two years ago. Later he protested against Netanyahu's "war rhetoric" with the Internet campaign "Israel loves Iran." Edry is critical of the legacy of the summer of protest. "It didn't change anything - on the contrary," says the 41-year-old. "And the political right has capitalized on that, because we didn't really realize our demands. The prices keep rising, and everything is continuing as before."

Nevertheless, two leaders of the social justice protests are standing for election for the Israeli Labor Party, or HaAvoda, which could become the second-strongest party in the Knesset. But it remains unclear who would join a Netanyahu coalition from the center-left. For Edry, only one thing is clear: "The Israeli people have to decide, and at the moment, in my opinion, they keep making the wrong decisions. We're getting more and more settlements and moving more and more to the right. At the end of the day, we're going to have our backs to the wall."

How the Gaza Strip blockade came about

As Israelis head to the polls, an important question is being asked: Will the Goverment of Israel take a different course on Gaza? DW looks at the territory's gradual isolation, which began before Hamas came to power. (20.01.2013)

The Syrian civil war threatens the country's neighbors. Turkey plans to protect itself with Patriot missiles, but other countries are also worried about the potential collapse of the Syrian state. (08.01.2013)

Life in Israel is getting more expensive. The occupied territories provide a cheaper alternative for young families - and the government is keen to help them move there. (30.12.2012)