Alexei Navalny is now out of a coma and "responding to verbal stimuli," a Berlin hospital has said. According to German authorities, the Russian opposition leader was poisoned with a weapons-grade Novichok nerve agent. 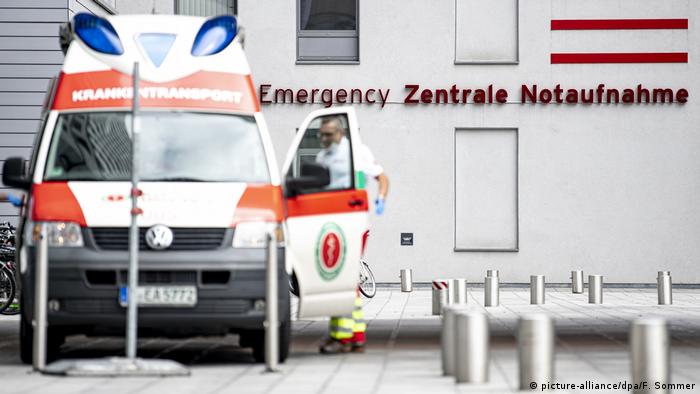 Alexei Navalny has been taken out of an induced coma and is responsive, the Berlin hospital treating the Russian opposition leader said on Monday.

"He is responding to verbal stimuli," Charite hospital said in a statement, reporting that the 44-year-old's condition "has improved," allowing doctors to end the medically induced coma and gradually ease him off mechanical ventilation.

The hospital added that Navalny was responding to speech but "long-term consequences of the serious poisoning can still not be ruled out."

The Kremlin critic has been in an induced coma in the Berlin hospital since he was flown to Germany for treatment late last month.

Novichok used in 'an attempted murder'

German experts say Navalny, who fell sick August 20 on a domestic flight in Russia, was poisoned with a substance identified as the Soviet-era nerve agent Novichok. The same nerve agent was used against Russian double agent Sergei Skripal and his daughter in an attack in England in 2018.

German Chancellor Angela Merkel confirmed last week that the findings showed "beyond a doubt" that Navalny had been poisoned with the chemical nerve agent from the Novichok group. She said the Russian opposition leader was a victim of "an attempted murder with nerve agent" in an attack meant to silence him.

Earlier Monday, Merkel's spokesperson warned she would not rule out consequences on the multibillion-euro Nord Stream 2 pipeline project if the Russian government failed to investigate the case.

Moscow has denied responsibility for the attack, with Foreign Minister Sergey Lavrov saying that Berlin has yet to share any findings with Russian prosecutors.

The Kremlin has denounced attempts to blame the attack on Russia as "absurd."

UK turns up the pressure

Top UK diplomat Dominic Raab said he was "[r]elieved to hear that Alexei Navalny has been taken out of the medically inducted coma."

He also said the UK government had summoned Russia's ambassador to London to "register deep concern" about the poisoning.

"It's completely unacceptable that a banned chemical weapon has been used and Russia must hold a full, transparent investigation," Raab wrote on Twitter.