Turkey said it could back Sweden and Finland's NATO bids if they stop supporting terrorists and lift export bans. Aspiring NATO bids require unanimous approval from existing members to join the alliance. 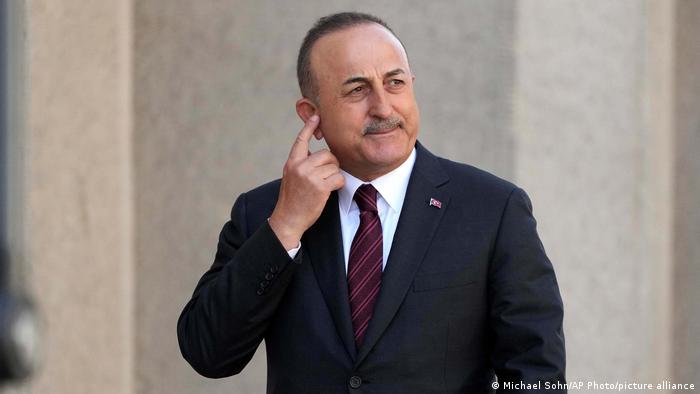 Turkey's Foreign Minister Mevlut Cavusoglu on Sunday outlined demands for Finland and Sweden which seek membership in NATO in response to Russia's invasion of Ukraine.

Speaking with Turkish reporters after a meeting of NATO foreign ministers in Berlin, he said that Sweden and Finland must stop supporting terrorists in their countries, provide clear security guarantees and lift export bans on Turkey.

According to Cavusoglu, Turkey was not threatening anybody or seeking leverage but speaking out especially about Sweden's support for the Kurdistan Workers' Party (PKK). Ankara views the PKK as a terrorist organization.

Finnish PM: 'We haven't had any indications that there would be any problems'

Cavusoglu echoed an earlier statement by Turkish President Recep Tayyip Erdogan two days ago, when he said Turkey did not have a "positive opinion" about Finland and Sweden's ambitions to join the military alliance.

Erdogan accused both countries of harboring "terrorist organizations" in his unfavorable assessment of the membership bids.

Sweden, in particular, has a large immigrant community that hails from Turkey.

Many of the migrants are of Kurdish origin and some have been granted political asylum after decades of sporadic conflict between Kurdish groups and Turkish security forces.

Finland confirmed on Sunday that it would apply for NATO membership. "This is a historic day. A new era is opening," Finnish President Sauli Niinisto told a joint news conference with Prime Minister Sanna Marin.

Niinisto also said he was "a bit confused" about what he said was a shift in Turkey's stance. "What we need now is a very clear answer, I am prepared to have a new discussion with President Erdogan about the problems he has raised."

Sweden is expected to follow Finland's suit, On Sunday, Sweden's governing Social Democrats were also expected to announce their support to join NATO.

Turkey's opposition could pose a problem for Sweden and Finland, given NATO applicants need unanimous approval from member states.

However, NATO Secretary-General Jens Stoltenberg voiced confidence Sunday at resolving Turkey's concerns. "I am confident we'll be able to find common ground, consensus on how to move on membership issues," Stoltenberg said.

How seriously are Finland and NATO taking Russian threats of retaliation?