NATO to hold summit in 2014 on Afghanistan troop withdrawal

NATO countries will hold a summit next year focusing on troop withdrawals from Afghanistan, US President Barack Obama has announced. He held talks with NATO head Anders Fogh Rasmussen in Washington on Friday. 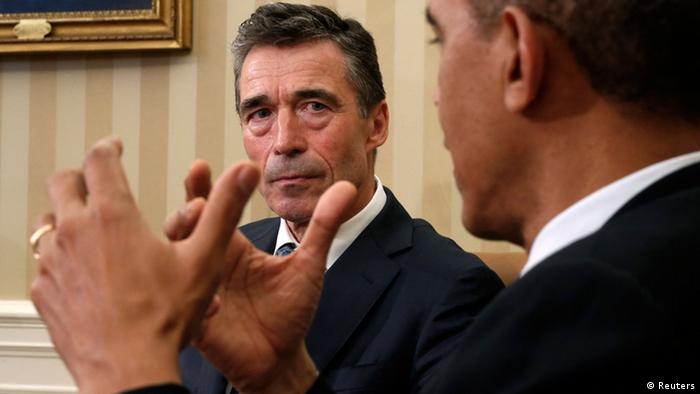 Obama said on Friday that next year's summit will focus on the "final chapter" in the war, as well as on a new training mission for after combat troops withdraw. Obama said he and Rasmussen discussed ways to ensure that after 2014 "Afghan security forces are effective and can control their own borders and that NATO members can be assured that Afghanistan will not be used as a base for terrorism in the future."

Most of NATO's 34,000 combat troops and the 62,000 troops from the US are preparing to withdraw from Afghanistan by the end of next year, marking the end of a war that dates back to the September 11, 2001 attacks on the United States.

"What we have agreed to is that in order for us to facilitate this entire process, it would be appropriate for us to have another NATO summit next year," said Obama. A date and a location for the talks have not yet been decided on. Obama said Rasmussen was looking for a country to host it.

Neither Obama nor Rasmussen would say how many troops would stay on to help with the mission in 2015. "It will be a very different mission. A non-combat mission with a significantly lower number of troops," said Rasmussen.

The goal of "an Afghanistan that can stand on its own feet" was in sight, said Rasmussen, but added that "the Afghans will not stand alone."

"We are prepared for an enduring partnership with the Afghan people," Rasmussen said.

The summit next year will also focus on how NATO addresses cyber threats and serve as a forum to "lock in" commitments from members, Obama said.

"That requires burden-sharing on the part of all NATO members. It means that even during times of austerity, that we work smarter together to ensure that we can meet and are prepared for any threats that may rise."

The pair also discussed modernizing the alliance's forces and stabilizing Libya's borders. Obama said Afghanistan was at the top of the agenda the pair discussed at the White House, and he did not respond to shouted questions by reporters as to whether the ongoing civil in Syria or the regional security challenges posed by the conflict came up in the meeting.