NATO Shows Stick to Moscow, Carrot to Tbilisi | Europe | News and current affairs from around the continent | DW | 19.08.2008

NATO foreign ministers agreed they "cannot continue business as usual" with Russia, and called for the withdrawal of Russian troops from Georgia. Moscow has not lived up to an EU-brokered peace deal, the alliance said. 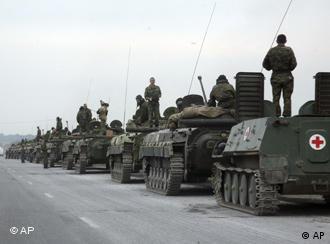 NATO's 26 foreign ministers toughened their stance against Russia at an emergency meeting called by the United States on Tuesday, Aug. 19.

"We have determined that we cannot continue with business as usual," the 26 NATO foreign ministers said in a joint statement following talks in Brussels. "We call on Russia to demonstrate -- both in word and deed -- its continued commitment to the principles upon which we agreed to base our relationship."

"The future of our relations with Russia will depend on the concrete actions Russia will take to abide by the words of President Dmitri Medvedev... which is not happening at the moment," he told reporters.

The NATO foreign ministers also agreed to create an additional NATO-Georgia Commission to strengthen relations with Tbilisi. Scheffer said the commission would function in a similar manner to an 11-year-old arrangement with Ukraine but would not prejudge Georgia's prospects of entering the alliance.

NATO, however, seemed unlikely to take drastic action, such as cutting off dialogue with Moscow.

Russia needs to learn that it cannot use force to change the borders of its neighbors, British Foreign Minister David Miliband said ahead of the meeting.

However, "I'm not one who believes that isolating Russia is the right answer to its misdemeanors. I think that the right response is hard-headed engagement," he said, without specifying how he would want this put into action. 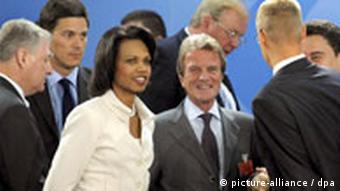 The US organized the emergency NATO meeting

The Organization for Security and Cooperation in Europe (OSCE) will immediately dispatch 20 unarmed observers to Tbilisi, after Russia reportedly agreed to the monitoring mission Tuesday morning.

The organization's team will supplement the current nine OSCE observers already based in South Ossetia, Finnish Foreign Minister Alexander Stubb said, speaking on the sidelines of the NATO meeting.

The OSCE had previously said it wants to send an additional 80 monitors to the area in the next few days. Both Russia and Georgia are members of the OSCE. Georgia has also agreed to the mission.

On Aug. 8, Georgia launched a military offensive against its breakaway region of South Ossetia. Russia has long provided military support to the province, which wants complete independence from Georgia.

Moscow put a stop to the Georgian operation, sending troops, tanks and warplanes into the area. Both sides have signed a ceasefire agreement, but the situation remains tense and there were no signs Tuesday that Russia was withdrawing its troops as promised. 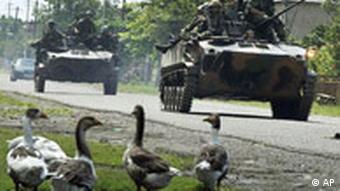 Russia has not yet left Georgia as promised

Germany has called on Russia to pull back its troops "at least from the heart of Georgia," German Foreign Minister Frank-Walter Steinmeier said Tuesday as he arrived at the NATO meeting.

Steinmeier did not say exactly what he meant by the "heart of Georgia" but the reference could be taken to mean all Georgian territory apart from the two separatist regions of South Ossetia and Abkhazia.

"The most important thing at the moment is to consolidate the situation which is still fragile and to bring about a lasting ceasefire," Steinmeier said as he arrived for a meeting of NATO foreign ministers in Brussels.

Russia has engaged to withdraw its troops from Georgia but there was no sign on Tuesday of that happening, the Georgian Interior Ministry said. 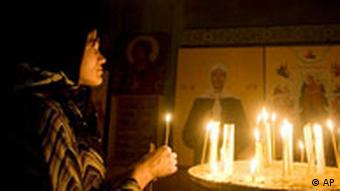 Georgia and Russia have agreed to a ceasefire

Germany's coordinator for Russian politics, Andreas Schockenhoff, reiterated Tuesday that Germany will not change its position on Georgia's eventual membership into NATO.

Chancellor Angela Merkel has made it clear to both sides that Germany will support the Membership Action Plan extended to Georgia in April, a step towards Georgia's eventual membership into NATO.

"Georgia can become a member of NATO," Schockenhoff said in an interview in Tuesday's edition of the Berliner Zeitung newspaper. "Russia does not have veto rights."

But Schockenhoff also reiterated that Georgia will not become a NATO member until it has resolved the issue of its internal borders.

Steinmeier: Russia has "Crossed the Line" in Georgia

German Foreign Minister Frank-Walter Steinmeier said Russia had acted inappropriately in Georgia, but stressed the need to use diplomacy to resolve the situation. (19.08.2008)

German Chancellor Merkel met President Saakashvili in Tbilisi Sunday as part of international peace efforts in the Caucasus crisis and said Georgia was on the path to NATO membership. (17.08.2008)

OSCE, crippled in Ukraine, could fulfill its potential after the war ends 23.05.2022

The world's largest security body, the OSCE, had to end its monitoring mission in Ukraine when Russia invaded. But the organization could take on a crucial role when it comes to rebuilding the country after the war.

Should NATO be afraid of the nuclear threat from Russia? No, says former Secretary-General Anders Fogh Rasmussen. In an interview with DW, he assesses the situation and looks at the history of NATO-Russia relations.