NATO chief calls for better coordination between member states | Europe | News and current affairs from around the continent | DW | 27.04.2010

The European Union and NATO have announced plans to improve cooperation to meet modern challenges. And EU defense minister agreed to meet regularly to discuss how to react more swiftly to conflicts or catastrophes. 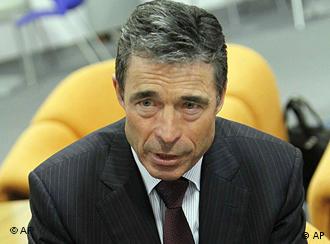 NATO Secretary General Anders Fogh Rasmussen on Monday urged members countries to pool their resources if the alliance was to successfully deal with threats of the 21st century.

The key to tackling the challenges of modern warfare was working together to build weapons and systems that are compatible and therefore cheaper in the long run, the NATO chief told the Belgian High Institute for Defense in Brussels.

"We should work harder to find solutions to fundamental problems between the EU and NATO," he said.

In the past, EU defense ministers met on average just once every six months on the sidelines of EU foreign minister meetings. Spainish defense minister Carme Chacon, whose country holds the rotating EU presidency, said that there was general agreement on meeting more frequently, as stipulated in the Lisbon treaty.

Faced with a crippling economic recession, national governments have been under intense pressure to cut back on public expenditure and implement military spending cuts.

"I understand that there are strong national interests at work here, and in the current economic climate, there is a real danger of protectionism," NATO chief Rasmussen said.

"But we must resist these temptations - purely national thinking is no longer affordable."

Rasmussen said NATO allies should give up on expensive national arms programs if it would make more economic sense to set up shared ones. As part of a new strategy to abandon Cold War structures and standardize costs, he also proposed setting up a joint financial pool to finance future military missions.

The failure to standardize equipment, from helicopters to combat vehicles was also adding to costs and putting lives at risk, Rasmussen added.

"We must overhaul our defense industrial markets - particularly here in Europe - to reduce the fragmentation and make them stronger," he said.

"It makes no sense for Europe to have 16 naval shipyards and 12 separate manufacturers of armored vehicles." 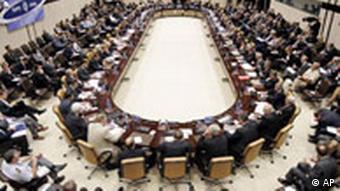 NATO members are protective of their national defence industries

The NATO Secretary General outlined concrete measures that included sharing tasks in Afghanistan between the European Union and the military alliance in training police.

Rasmussen said he had proposed that the EU concentrate on the civilian aspects of policing in Afghanistan like criminal investigation or justice reforms and for NATO to focus on the more challenging aspects of the ISAF mission.

At a meeting of European Defense Ministers in Luxembourg, EDA chief Alexander Weis called for greater cooperation between EU member states in the development of unmanned drones.

Weis, who used to be Deputy National Armanents Director in the German Ministry of Defense, recalled how 25 years ago, six EU countries collaborated in the development of three fighter jets.

He told the ministers that the development of Eurofighter, Rafale and Viggen had cost around 25 billion euros. The European Union could have saved a lot of money and were now in a similar situation with the drones.

The European Defense Agency was established by the Council of Minister in 2004 to support the Member States and the Council in their effort to improve European defense capabilities in the field of crisis management and to sustain the European Security and Defense Policy.

Ministers have agreed on a NATO plan for the gradual handover of security responsibilities in Afghanistan to Afghan forces. Earlier in the talks, ministers discussed the withdrawal of nuclear weapons from Europe. (23.04.2010)

NATO Secretary General Anders Rasmussen has appealed for a joint missile defense shield with Russia to cover Europe and offer protection from a possible terror attack. But analysts are still cautious about its prospects. (20.04.2010)