National Front seeks to exploit poverty in Provence | Europe| News and current affairs from around the continent | DW | 10.06.2017

There is high poverty and low opportunity in Vaucluse, in southeastern France. That's a situation that the far-right National Front knows how to exploit, even if it means turning voters against their immigrant neighbors. Francois Gautier cuts potatoes into rings and tosses them into a frying pan at the stand he runs in a local market. As he waits for the potatoes to cook, he scans the people strolling through the square in the center of Carpentras. "See that man over there?" he asks. A pensioner stops and smiles at Gautier. "You probably think he looks like a nice old man," Gautier says. "But he is a National Front voter." How does he know? "I have a feel for it. People vote for extremists here."

Carpentras is located the administrative district of Vaucluse, in the Provence-Alpes-Cote d'Azur region of France, traditionally a stronghold of the middle-class and center-right. Yet, for the past several years, far-right parties have been gaining in popularity here. It is not uncommon for the National Front (FN) to win 30-50 percent of the vote in Vaucluse. In 2012, FN founder Jean-Marie Le Pen put up his then-22-year-old granddaughter, Marion Marechal-Le Pen, as the party's parliamentary candidate in the district. The niece of Marine Le Pen, the party's chair at the time, she was one of two FN candidates to win seats in France's National Assembly. When the FN lost May's presidential election, Marechal-Le Pen announced her temporary retirement from politics. It was an enormous setback for the party, which had hoped to gain a number of seats in this Sunday's parliamentary elections. 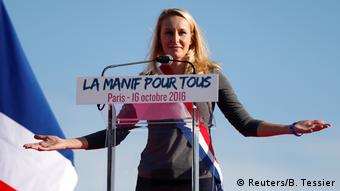 Supporters are very disappointed that Marechal-Le Pen stepped down, the FN's Herve de Lepinau says. But the FN is firmly anchored in Carpentras. De Lepinau, who will take Marechal-Le Pen's place as the city's candidate Sunday, says that he is nevertheless confident. The 47-year-old has so far served as deputy parliamentarian and has worked as an attorney in Carpentras for more than 20 years. Dressed in a suit - without a tie and with his collar unbuttoned - he wanders along with members of his campaign team below the sycamore trees that line the market square. Among the fruit, vegetable and lavender stands, groups of onlookers gather around him whenever he stops to joke, greet friends and speak with voters.

Philippe Patacq says he is uncertain about whether he will vote for de Lepinau - but he had had no such doubts when it came to Marechal-Le Pen. She is "smart, pretty and quick-witted," he gushes. Adding, "It is a joy to listen to her. You can understand what she says." Marechal-Le Pen represented the right-wing opposition to her aunt within the party and was well-known for her opposition to abortion and her exceedingly harsh criticism of immigrants and Muslims. "I don't have anything against immigrants," says Patacq. He says the problem is the terrorists who enter the country among them. The Paris and Nice attacks served to further convince him of the need to vote for the National Front. He says, "I experienced those kinds of attacks in Algeria, I know what it means." Patacq himself is one of the many "Pieds-Noirs," the French-Algerians who emigrated to France after its former colony Algeria gained independence, now living in southern France.

Isabelle Sautret says she does not even want to vote, "because of all the injustices." The 47-year-old is having problems with authorities. Building inspectors prohibited her from building a shed because "it didn't meet code," she says. She runs a tree farm and had wanted to expand it and hire more workers. De Lepinau tells her that authorities acted illegally in denying her the right to build. She says that she will talk to him about it more later, and that she will likely vote for him on Sunday. She says she isn't a racist, but it is difficult to work with Muslims because they want employers to change working hours during Ramadan. "We have to submit to them," complains Sautret. "Everything we have earned is being taken away." 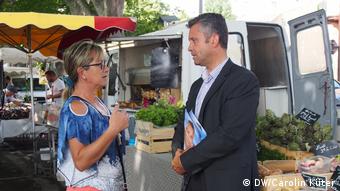 The political scientist Christele Marchand-Lagier says many FN voters in Vaucluse choose the party because they feel that they have been treated unfairly. In her research at the University of Avignon, Marchand-Lagier has conducted numerous interviews with regional voters over the last 20 years. One reason they are frustrated is the massive inequality they face: real estate prices are especially high in the Provence due to its popularity among tourists and foreigners. Still, the agricultural region is one of the poorest in France. "People feel left behind," says Marchand-Lagier. More and more, middle-class French are also getting the impression that they are underpaid for their labor, while others are living too comfortably from welfare payments. The popularity of right-wing extremists is not primarily a case of racism, the researcher says. Adding that many voters don't even know what the FN actually stands for in terms of policy. "People simply say, if the conservative right failed, why not try something else."