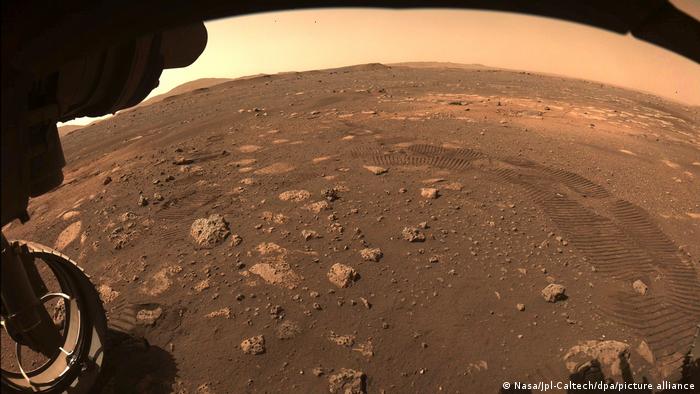 The six-wheeled Perseverance rover landed on Mars in February

The Perseverance rover extracted the oxygen using a toaster-sized device called MOXIE, marking the first time that a resource was extracted from another planet for use by humans.

"This is a critical first step," Jim Reuter, associate administrator of NASA's Space Technology Mission Directorate, said in a statement. "MOXIE has more work to do, but the results from this technology demonstration are full of promise as we move toward our goal of one day seeing humans on Mars."

The six-wheeled NASA rover landed on Mars on Feb. 18 after a seven-month journey from Earth, bringing the MOXIE converter, the Ingenuity mini-helicopter, and various other high-tech devices to the red planet. In its first use, MOXIE, short for Mars Oxygen In-Situ Resource Utilization Experiment, produced about 5 grams of oxygen. This is enough for one astronaut to breathe for about 10 minutes, NASA said.

In the future, the device will be able to generate up to 10 grams of oxygen per hour, and scientists plan to run the machine at least another nine times over the next two years under different conditions and speeds, according to the agency.

Opening the door to human exploration

The atmosphere on Mars has only trace amounts of oxygen. Securing an abundant supply is crucial to supporting human exploration of the planet, both as a sustainable source of breathable air for astronauts and as an ingredient for rocket fuel that would fly them home.

"MOXIE isn't just the first instrument to produce oxygen on another world," Trudy Kortes, director of technology demonstrations within NASA's Space Technology Mission Directorate said in a statement. She called it the first such technology to help future missions "live off the land" of another planet.

MOXIE works through electrolysis, using extreme heat to separate oxygen atoms from carbon dioxide molecules, which account for about 95% of the atmosphere on Mars. The remaining 5% of Mars' atmosphere, which is only about 1% as dense as Earth's, consists primarily of molecular nitrogen and argon.

Astronauts living and working on Mars could require one metric ton of oxygen between them to last an entire year, NASA said.