NASA has carried out the first powered, controlled flight on another planet. Ingenuity was able to lift, rotate, and land. More complicated tests are planned in the coming weeks. 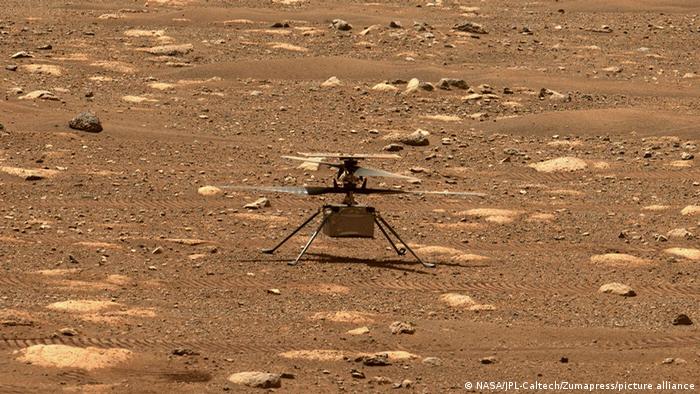 The United States space agency, NASA, on Monday successfully tested a small helicopter on Mars, with flight data traveling across the "deep space network" and arriving at mission control several hours after the test was completed.

Ingenuity executed a pre-programmed flight using an autopilot mechanism and a navigation system. The flight maneuver needed to be pre-programmed, as it takes 15 minutes for signals to travel from Earth to Mars.

The 1.8-kilogram (4-pound) craft was able to lift off, hover in place above the surface, and then land gently. The test was carried out in a vast Martian basin called Jezero Crater.

In a live broadcast of the data arriving, NASA scientists applauded as images arrived showing Ingenuity hovering above the Martian surface.

Images of the flight were captured by the Perseverance rover, which was parked some 76 meters from the flight zone. Cameras on the Ingenuity also took several photos of the Martian surface. All of the flight data was transmitted back to Earth by Perseverance.

NASA hopes more images and a more complete video of the flight will arrive to Earth over the course of several days.

What is Ingenuity's mission?

Ingenuity traveled to the red planet strapped to the Perseverance rover, which touched down on February 18 to begin a mission searching for signs of life on Mars.

For now, the goal of the Ingenuity is to demonstrate that its flight technology works, which could pave the way for faster exploration of extraterrestrial surfaces.

The thin air on Mars, which has less than 1% of Earth's atmospheric pressure, also makes it harder to achieve lift, although this is partially offset by a weaker gravitational pull.

NASA engineers had also been particularly concerned about wind gusts during the landing, as the helicopter cannot prop itself up if a gust of wind, or a botched maneuver, knocks it over.

What next for Ingenuity?

After the first successful flight, Ingenuity will carry out several lengthier flights in the coming weeks, with breaks to recharge batteries.

The next flight should take place within four days. Each test is set to be successively more difficult.

For example, NASA eventually aims to have the craft rise 5 meters and then move laterally.

Ingenuity's "lifetime will be determined by how well it lands" each time, said Ingenuity project manager MiMi Aung.

"Once we get to the fourth and fifth flight, we'll have fun," she said. "We are going to take very bold flights and take high risk."

NASA had compared Monday's test flight to the first powered flight of an airplane, achieved in 1903 by the Wright brothers in Kitty Hawk, North Carolina. The Ingenuity is carrying a small piece of fabric from the Kitty Hawk plane, in honor of the first flight on Earth.

"Each world gets only one first flight," said Aung ahead of the first attempt.