Moving a few meters back and forth, the short trip was a mobility test for the Perseverance rover. It comes just two weeks after touching down on the red planet. 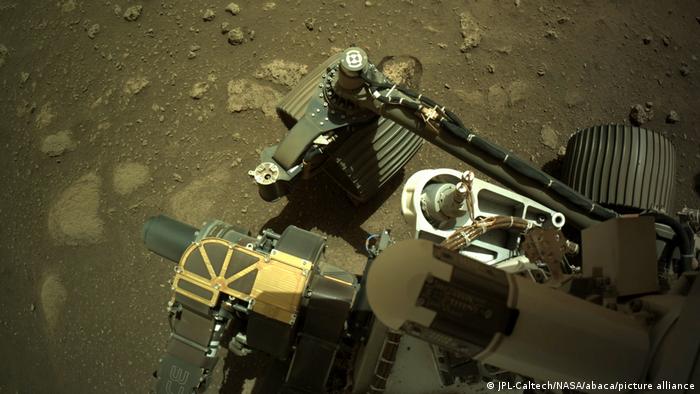 During its first test drive on Mars, Perseverance made several images of its wheels rolling through a Martian landscape

The Perseverance rover hit a new milestone this week, taking its first test drive on the red planet, NASA announced on Friday.

In total, the six-wheeled, car-sized astrobiology probe moved forward 4 meters, turned in place to the left and then backed up another 2.5 meters to park temporarily.

The rover "responded superbly," said NASA engineer Anais Zarifian. "We are now confident our drive system is good to go, capable of taking us wherever the science leads us over the next two years."

What's next for Perseverance?

Some additional, short-distance test driving was planned for Friday.

Perseverance is capable of averaging 200 meters (656 feet) of driving per day once it starts its scientific exploration.

So far, the rover and its hardware, including its main robot arm, appear to be operating flawlessly, said Robert Hogg, deputy mission manager.

Engineers still have additional equipment checks to run on the rover's many instruments before they will be ready to send the robot on a more ambitious journey as part of its primary mission to search for traces of fossilized microbial life.

When will the helicopter be used?

Before the rover can head for an ancient river delta to collect rocks for eventual return to Earth, it must drop its so-called protective "belly pan'' and release an experimental helicopter named Ingenuity.

Luckily, Perseverance landed right on the edge of a potential helicopter landing strip — a nice, flat spot, according to NASA.

The plan is to drive out of this landing strip, leave the pan behind, and then return for Ingenuity's highly anticipated test flight.

All this should be accomplished by late spring.

What is the long-term mission?

The rover, which weighs around 1,000 kilograms (2,205 pounds) and is the size of a small car, touched down on Mars on February 18 after a roughly 480-million-kilometer journey through space.

NASA hopes the project will help pave the way for human exploration of the red planet.

The rover joins NASA's InSight lander, which has been on the Martian surface since 2018, and the Curiosity rover, which landed on Mars in 2012.

During a news conference on Friday, NASA's Jet Propulsion Laboratory in Pasadena, California, shared photos of the rover's tracks over and around small rocks.

The wheel tread left marks in the reddish, sandy Martian soil after its first drive.

Another image of the surrounding landscape shows a rugged terrain littered with large, dark boulders in the foreground and a tall outcropping of rocky, layered deposits in the distance — marking the edge of the river delta.

Only about six people at the space agency knew about the encoded message before the rover's landing on Mars. A puzzle lover on the team was behind the idea.

After touching down on Thursday, the Mars rover has already sent back a few early high-resolution color images from the planet.