Only about six people at the space agency knew about the encoded message before the rover's landing on Mars. A puzzle lover on the team was behind the idea. 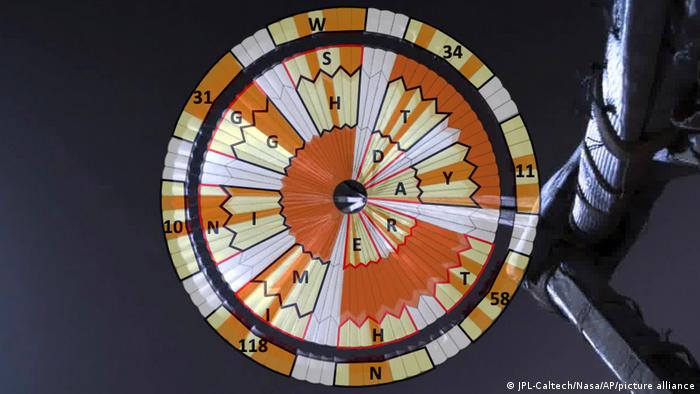 The enormous orange and white parachute deployed by NASA's Perseverance rover to land on Mars contained a secret message, thanks to a puzzle lover on the spacecraft team.

Systems engineer Ian Clark used a binary code to spell out "dare mighty things'' — a line from former US President Theodore Roosevelt — in the orange and white strips of the 70-foot (21-meter) parachute.

He also included the GPS coordinates for the mission's headquarters at the Jet Propulsion Laboratory in Pasadena, California. Clark, a crossword hobbyist, came up with the idea two years ago.

Engineers wanted an unusual pattern in the nylon fabric to know how the parachute was oriented during descent. Turning it into a secret message was "super fun," he said Tuesday.

Only about six people knew about the encoded message before Thursday's landing, according to Clark. They waited until the parachute images came back before putting out a teaser during a televised news conference Monday.

It took just a few hours for space fans to figure it out, Clark said. Next time, he noted, "I'll have to be a little bit more creative."

Although not creative enough to trick online enthusiasts for more than a matter of hours, the chosen Roosevelt quote encapsulated NASA and its operations fairly neatly.

"Far better is it to dare mighty things, to win glorious triumphs, even though checkered by failure, than to take rank with those poor spirits who neither enjoy much or suffer much, because they live in the gray twilight that knows not victory nor defeat," Roosevelt said in an 1899 speech titled "The Strenuous Life."

As for the GPS coordinates, the spot is 10 feet (3 meters) from the entrance to JPL's visitor center.

Another added touch not widely known until touchdown: The rover bears a plaque depicting all five of NASA's Mars rovers in increasing size over the years.

It also carries a plate that is dedicated to medical and frontline workers during the COVID health crisis.

They should be visible once Perseverance's 7-foot (2-meter) arm is deployed in a few days and starts photographing under the vehicle, and again when the rover is driving in a couple weeks.

NASA this week released the first high-quality video of a spacecraft landing on Mars.

It showed the giant parachute hurtling open and the red dust kicking up as rocket engines lowered the rover to the surface.

The space agency also presented a brief audio clip captured by microphones on the rover after its arrival. It included the murmur of a light wind gust — the first ever recorded on the fourth planet from the sun.

A revolution in the history of space travel took off on 20 July 2021. Amazon founder Jeff Bezos flew in his rocket 106 kilometers into outer space.

Inside the cosmos: James Webb Space Telescope continues to dazzle 03.08.2022