The letters, which the French state has auctioned at Drouot in Paris, had been in the collection of the bankrupt investment firm Aristophil. On sale were three of the many letters Napoleon wrote to his wife Josephine. 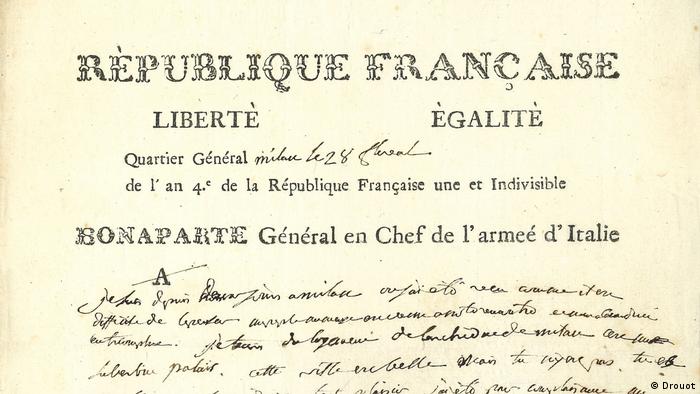 The French auction house Drouot announced on Friday that three love letters written by French Emperor Napoleon Bonaparte were sold for a combined total of €513,000 ($575,000) in Paris on Thursday.

The letters, penned by Napoleon between 1796 and 1804, were sent to his wife Josephine de Beauharnais.

In one, written during his 1796 Italian campaign, the emperor bemoaned the fact that his wife had not written to him: "No letter from you my adorable friend, you must have very sweet preoccupations since you forget your husband, who, though in the midst of business and extremely tired, thinks only and desires only you (…) I am isolated. You have forgotten me." At the time, Josephine was having an affair with Lieutenant Hippolyte Charles.

The love of his life

The two married in 1796, when Napoleon was 26 and Josephine, a widow and mother of two, was 32. They divorced in 1810, as Josephine was unable to produce an heir. Though he quickly married Marie Louise of Austria, Napoleon remained devoted to Josephine for the remainder of his life. Her name was the last word he uttered on his deathbed in 1821. 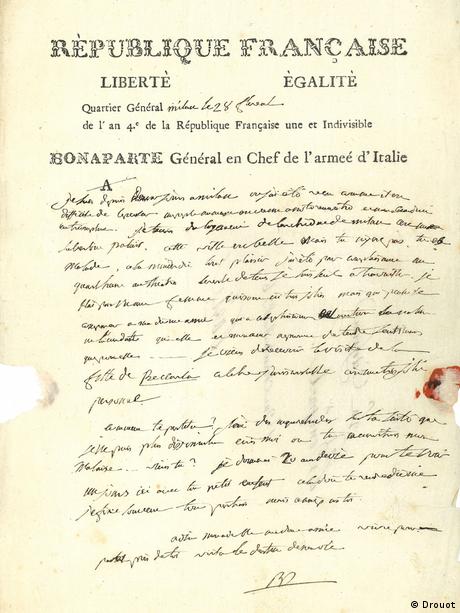 Napoleon's letter to his wife Josephine, written during his 1796 Italian campaign, was one of three sold at Paris auction house Drouot on Thursday

The letters were part of the collection of the now defunct investment firm Aristophil, which was shuttered four years ago in scandal. Started by Gerard Lheritier in 1990, the firm speculated in precious documents and objects from antiquity to the twentieth century before going bust.

When the company went bankrupt its large holding of precious documents was handed over to the French government. The collection is being auctioned off by French houses Ader and Aguttes at Drouot.

Last year, 14 auctions of the Aristophil collection brought €26.4 million. In all, a total of 300 auctions are planned over the next five years. Among the other items sold at Thursday's auction was a rare Enigma encryption machine used by the Nazis during World War II, which fetched €48,100.

A piece of "French royal treasure" went under the hammer with the auction of the 19.07-carat Grand Mazarin diamond in Geneva. The jewel once graced the crowns of Louis XIV, Emperor Napoleon and Empress Eugenie. (15.11.2017)