After hundreds of tons of dead fish were removed from the Oder River bordering Germany in August, new die-offs have compounded the ecological disaster. The causes are complex.

Following the mass fish die-offs in the Oder River bordering Germany and Poland in August, more dead fish were discovered downstream near the German town of Oderberg on Sunday.

Initial fears of water poisoning proved unfounded, and an immediate warning to not touch the water was withdrawn later in the day by authorities in the northeast of the state of Brandenburg.

Meanwhile, dead fish were again discovered in a side-channel on the Polish side of Oder River on Sunday, with more than 300 kilograms of carcasses removed from the water by the afternoon, Polish TV news reported.

The cause of the mass fish die-offs that began in late July remain unclear. Theories that high mercury levels, the dumping of a toxic solvent or pesticides might be responsible have not proved definitive.

One form of golden algae known as Prymnesium parvum is especially toxic for gill-breathing organisms such as fish, crayfish and gilled amphibians.

However Sunday's discovery of dead fish in the Alte Oder, a tributary of the Oder River, is likely unconnected since it was sealed off after the initial mass fish die-off.

State Agriculture Minister Axel Vogel of the Green Party, said on Monday that the fish kill in the Alte Oder was triggered by oxygen depletion, adding that the scale was much smaller.

The lack of fresh water running into the tributary compounded high temperatures and evaporation. "The fish suffocate because they no longer have oxygen," Vogel said.

Christian Wolter, researcher at the Department of Fish Biology, Fisheries and Aquaculture at the Leibniz Institute of Freshwater Ecology and Inland Fisheries (IGB), said a "common" algae bloom was also to blame for oxygen loss and the latest die-off — and not a toxic Prymnesium parvum bloom.

The common algae bloom has "collapsed," and as it dies off it is "metabolized by bacteria, a process that consumes the oxygen in the water, leading to hypoxia [depleted oxygen in bodies] and local fish kills," Wolter said.

It is hoped that a final report by a joint German-Polish taskforce, due to be released by the end of September, will shed further light on the cause of the mass fish die-off.

Meanwhile, there are signs the Oder River is recovering after the mass fish kill, with a sample taken in late August by the Institute of Inland Fisheries in Potsdam-Sacrow revealing at least 19 healthy fish species.

In late July, Polish anglers reported removing tons of dead fish from the Oder near the town of Olawa, about 300 kilometers (186 miles) southeast from the city of Frankfurt (Oder) where a mass fish kill was reported two weeks later.

At the time, water authorities based in the nearby Polish city of Wroclaw detected a toxic substance in two locations on the Oder assumed to be the solvent mesitylene, which is known to have a harmful effect on fish. However, subsequent tests have shown no trace of the substance.

Mercury was also identified as a potential culprit for the more recent die-off. But Polish Environment Minister Anna Moskwa confirmed negative tests for mercury and heavy metals in river fish. Lab tests did show high levels of salinity in the water.

Still, local authorities have warned residents, along with their pets and livestock, not to touch the river water. 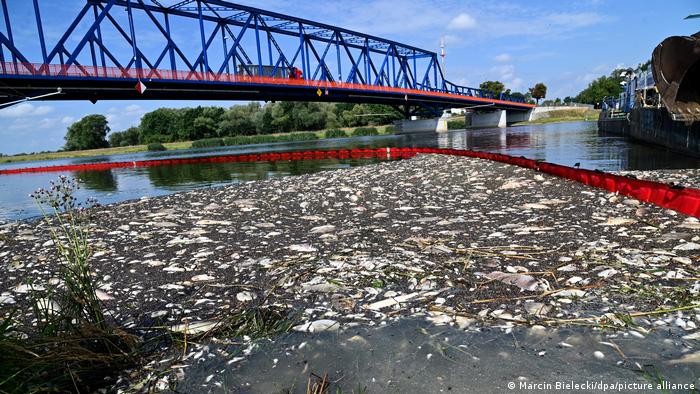 Thousands of dead fish are being collected on the River Oder

Still no proof of poison

While German and Polish authorities believe contamination is the cause of the die-off, political leaders who met August 14 said water tests gave no definitive proof of high toxicity in the river.

Tests for pesticides and around 300 other substances were then being conducted by the Polish environment ministry.

The River Oder runs though the Czech Republic, Poland and Germany

Heat and drought could be factors

Christian Wolter from IGB said the problems on the Oder may run deeper.

Fish in the river are struggling, he said, due to lower oxygen levels caused by historically low water levels (a trend since 2018) and high water temperatures of around 25 degrees Celsius (77 Fahrenheit).

This situation has been exacerbated by ongoing discharges of wastewater into the Oder.

"This is legal and usually wouldn't matter," Wolter explained. "But with low water levels you get a higher concentration of [oxygen consuming] salt and organic material."

Added to the mix is work on the Polish side of the Oder building groins — rigid structures created with rock, soil and gravel to prevent erosion. This has increased sediment, which also reduces oxygen levels in already shallow water, Wolter said.

Meanwhile, local anglers told Wolter that fish die-offs were observed further upstream from Olawa as early as March. This suggests a deeper and more widespread problem than a single contamination event in late July.

Wolter also noted that floodplains in the area have been overly drained in recent decades, causing much drier and stressed river systems.

Lawmaker Malgorzata Tracz from the Polish Green Party told DW that despite alerting authorities about the ecological catastrophe on the Oder, Polish government institutions did not even warn residents that they should not touch the river water.

"The problem is huge," she said. "It is not something that can be ignored or that will be overcome on its own."

The local fishing community "are terrified by the situation," she noted, saying that anglers have been most vocal on the issue in Poland due to the lack of support from public institutions.

Tracz said that "there are many theories" about the cause of the fish kill and wants an in-depth investigation. 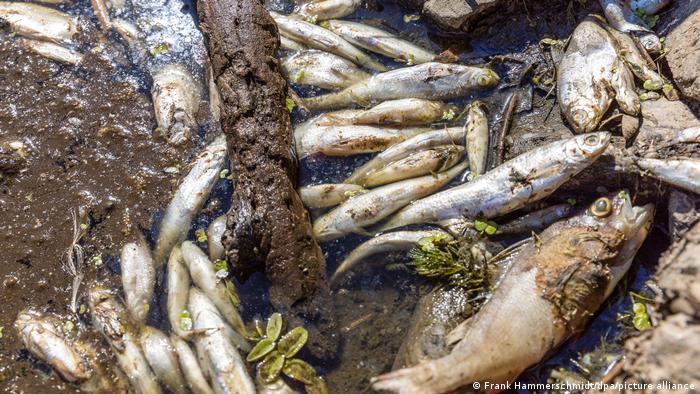 German environment groups are blaming insufficient water conservation measures for the die-offs, as well as a lack of cross-border cooperation on the frontier river that crosses the Czech Republic, Poland and Germany.

"This ecological catastrophe would not have been of such magnitude if the German and Polish authorities had worked together more intensively," said Antje von Broock, managing director of the German Association for the Environment and Nature Conservation (BUND), adding that targeted warnings should have been put in place.

"Dead fish have been floating on the Oder since the end of July, now over a distance of several hundred kilometers," she said in a statement.

A "diverse and healthy ecosystem" could better resist toxic substances in the river, if they were responsible for the die-off, von Broock added.

"The fish kill is therefore also a symptom of decades of poor planning in water management and chronic underfunding of water protection."

Both BUND and Malgorzata Tracz said the International Commission for the Protection of the Oder, a joint agreement between Poland, the Czech Republic and Germany to protect one of Europe's more pristine waterways, needed to be upheld.

This story was first published on August 12. It was updated on August 15 and subsequently on September 5 to include the latest information on the investigation into the die-off.

While you're here: DW offers several daily and weekly email newsletters. Every Tuesday, for example, editors round up what is happening in German politics and society in our "Berlin Briefing." You can sign up here.

Once Upon a River - Cambodia’s Mekong Crisis

New hydropower dams on the Mekong River are leaving fishing and farming communities high and dry. The dams provide clean electricity, but they also cause massive damage to Cambodia's plant and animal worlds.

Once Upon a River - Bangladesh's polluted delta

Bangladesh is struggling just to stay afloat. Literally: By 2050, it’s estimated that climate issues will displace one in seven of the country's inhabitants.

With talks underway in Geneva on plans to ban the use of the poisonous substance mercury, you might be surprised to read that it's technically safe to drink - although you shouldn't try it at home.

Thousands of dead fish have washed up along the banks of the Oder river bordering Germany and Poland in recent weeks. High levels of mercury have been detected in water samples taken from the river. An investigation is now underway to determine the cause of the ecological disaster.

In August, thousands of fish started dying mysteriously the Oder River. With the heat, rain and help of volunteers, most of the fish cadavers are now gone. But residents are beginning to realize that nothing is as it was along the Oder anymore.

Fishing and canoeing are prohibited for now. Those impacted are hoping for quick answers and a speedy recovery.